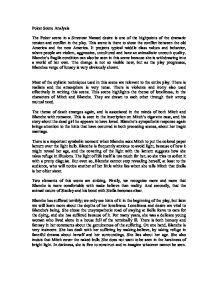 Poker Scene Analysis The Poker scene in a Streetcar Named desire is one of the highpoints of the dramatic tension and conflict in the play. This scene is there to show the conflict between the old America and the new America. It projects typical middle class values and behavior, where people are violent, aggressive, uncultured and have an animalistic uncouth quality. Blanche's fragile condition can also be seen in this scene because she is withdrawing into a world of her own. The change is not so visible now, but as the play progresses, Blanches verge of lunacy is very obviously shown. Most of the stylistic techniques used in this scene are relevant to the entire play. ...read more.

The light of life itself is too much for her, so she tries to soften it with a pretty disguise. But even so, Blanche cannot stop revealing herself, at least to the audience, who will notice another of her little white lies when she tells Mitch that Stella is her older sister. Two elements of this scene are striking. Firstly, we recognize more and more that Blanche is more comfortable with make believe than reality. And secondly, that the animal nature of Stanley and his bond with Stella becomes clear. Blanche has suffered terribly; we only see hints of it in the beginning of the play, but later we will learn more about the depths of her loneliness. ...read more.

She wants to become what she thinks will make others happy. Stanley is at his most basic and animalistic in this scene. He insists on living up to the ideas of absolute male dominance; he acts like the apartment is his and his alone. He seeks to dominate not only the women, but the other men as well. He beats his pregnant wife. And yet Stella comes back. Something about Stanley excites her, even, or perhaps especially, when he is at his most beast-like. Significantly, what we see of their making-up is completely wordless. There is not an eloquent plea for forgiveness, no promise of better behavior: Stanley and Stella make up by coupling like animals. Words come second, if at all. The bond between Stanley and Stella is not intellectual, but physical. ...read more.