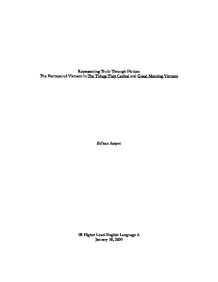 Representing Truth Through Fiction: The Portrayal of Vietnam in The Things They Carried and Good Morning Vietnam

Representing Truth Through Fiction: The Portrayal of Vietnam in The Things They Carried and Good Morning Vietnam Shi'aan Assynt IB Higher Level English Language A January 18, 2009 Most veterans of the Vietnam War will remember a land that was radically different from what they knew and were used to, a country that was hot and humid, full of diseases and traps that seemed to advantage the enemy while crippling the soldiers. The territory was unfamiliar and treacherous, as rain led to large mud patches and landslides and the jungle was easy to get lost in. The overwhelming heat and humidity was a perfect climate for disease and sunstroke to develop, afflictions that affected many soldiers. Vietnam was a hostile environment for the young American soldiers that went to fight in it, and this hostility is well portrayed in Tim O'Brien's collection of short stories, The Things They Carried, while it is not as well displayed in the famous film "Good Morning Vietnam". ...read more.

In this story, a young American girl, the girlfriend of one of the soldiers, is flown over to Vietnam to join the platoon and her boyfriend. Yet this turns out unexpectedly as she does not share the soldiers' antipathy of the land, instead finding herself head over heels in love with the completely foreign country that is so different from everything she knows. The soldiers are bewildered by the passion that Mary Ann Bell, the girl in question, has for the Vietnamese culture and country, and do not understand how she can love the place so much. Again, the uncertainty of Vietnam is showed, as it seduces some while leaving others confused and antagonized. In "Good Morning Vietnam", another side of the uncertainty in Vietnam is shown. Adrian Cronauer, the main character (played by Robin Williams) arrives in Vietnam as a DJ for the radio show that is broadcast all day for the whole of the country to hear. Cronauer is originally content with his position, and feels distanced from the fighting. ...read more.

Fiction can serve well to show a reader (or watcher) with no previous experience of the subject matter what the situation was like, but some forms are better than others. The advantage to film is that we can very obviously see a set of circumstances and thus empathize with it better, provided it is clearly shown. However, reading a novel in which events are described in a personal voice, as is the case in The Things They Carried can also help to immerse the spectator into the situation, especially when the work is written from numerous perspectives or gives a view of varied circumstances. If fiction is to accurately portray real situations, it must be clear and preferably unbiased, or allow the third party to have reference points by comparing the unknown to that which is familiar, or by using vivid imagery. All in all, fiction can display facts, but these are often obscured by the emotions that are felt when responding to a piece, whether of text or film. 1 Found on Internet Movie Database page: "Good Morning, Vietnam - Memorable quotes". <http://www.imdb.com/title/tt0093105/quotes> ...read more.