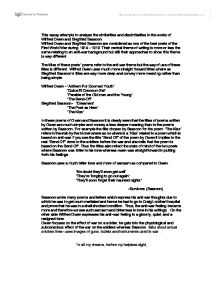 This essay attempts to analyse the similarities and dissimilarities in the works of Wilfred Owen and Siegfried Sassoon. Wilfred Owen and Siegfried Sassoon are considered as one of the best poets of the First World War during 1914 - 1919. Their central theme of writing is more or less the same relating to an anti-war background but still their approaches to show this theme is way different. The titles of these poets' poems refer to the anti war theme but the way of use of these titles is different. Wilfred Owen uses much more straight forward titles where as Siegfried Sassoon's titles are way more deep and convey more meaning rather than being simple. ...read more.

Thus the titles also reflect the state of mind of the two poets where Sassoon was bitter in his tone whereas owen was straightforward in putting forth his feelings. Sassoon uses a much bitter tone and more of sarcasm as compared to Owen. 'No doubt they'll soon get well' 'They're 'longing to go out again' 'They'll soon forget their haunted nights' -Survivors (Sassoon) Sassoon wrote many poems and letters which express his anti war thoughts due to which he was to get court-martialed and hence he had to go to Craig Lockhart hospital and prove that he was in a shell shocked condition. Thus, the anti-war feeling became more and therefore we see such sarcasm and bitterness in tone in his writings. ...read more.

The simile illustrates the suffering of the man and his hopelessness. Owen also uses sarcasm, the title of his poem "Dulce Et Decorum Est" itself suggests the sarcasm in the poem. Owen also uses negative connotations which give the reader a feeling of unease and malady. For eg. "sludge," "fatigue," "guttering," "froth-corrupted," "vile," and "incurable" have negative connotations. Enjambment is also a key factor as it quickens the pace of the poem. " On the other hand Sassoon uses intense sarcasm in order to portray his anti-war feeling. He uses symbolism and contrast in his poems. "Death's gray land" where gray refers to land of the dead instead of a beautiful 'dream' (sarcasm). Sassoon also shows personification in his poems. "Brother Lead" and "Sister Steel" are personified and refer to bullets and bayonets. ...read more.