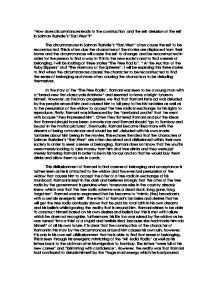 "How does circumstances leads to the construction and the self-delusion of the self in Salman Rushdie's 'East,West'?" The circumstances in Salman Rushdie's "East,West" often cause the self to be reconstructed. This is often due the characters of the stories are displaced from their home and the circumstances will cause the self to change and be reconstructed in order for the person to find a way to fit into the new society and to find a sense of belonging. I will be looking at three stories "The Free Radio", " At the Auction of the Ruby Slippers" and "The Harmony of the Spheres" . I will be exploring this three stories to find when the circumstances causes the character to be reconstructed to find the sense of belonging and more often causing the characters to be deluding themselves. In the story of the "The Free Radio", Ramani was seen to be a young man with a "brand-new first-class cycle rickshaw" and seemed to have a bright future in himself. ...read more.

Ramani was so engrossed that he became to "mimic (the) broadcasts with a certain energetic skill". The effect of Ramani's fantasies and desires that he will get the free radio obviously shows that he puts his total faith in his own dreams and his beliefs while ignoring the reality that is around him. Ramani wishes to be able to construct himself based on his own desires and beliefs but this is met with failure which he does not recognize, furthermore, his life too was ruined by the widow as he was turned "into a thief of a stupid and terrible kind, because she had made him rob himself" of all his own future. It is clear that the construction of the character of Ramani in this story by the circumstances around him causes his own ruin, however, it is only in his own self-disillusionment that he is able to find that sense of belonging. This is seen through his energetic mimicking of the "All-India Radio" as well as his letters back to the old man after his migration to Bombay. ...read more.

It is as though the slippers have become a magic currency and can grant the wish of anyone including the narrator's that of to win the love of Gale. The belief that the slippers "promised to take us home" is more often in the mind than in reality and thus it is more fictional. As the tension rises as the bidding for the ruby slippers increase, the sense of self-delusion in order to achieve one's own dreams and desires increases also as "the money has become no more than a way of keeping score" and "one becomes detached from the earth" . It will be as though reality has turned into fiction as the "ultimate goal crosses a delirious frontier". Society in his chase for its desires and wants has turned the achievement into a fictional belief. The overarching theme of the wish to find a sense of belonging is still present in the story as the ruby slippers are the key and the goal in order to achieve their desires which will bring them the sense of belonging. ...read more.