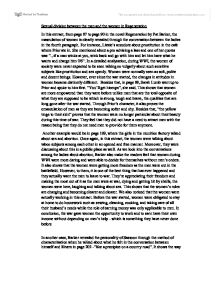 Sexual division between men and women

Sexual division between the men and the women in Regeneration In this extract, from page 87 to page 90 in the novel Regeneration by Pat Barker, the masculation of women is clearly revealed through the conversation between the ladies in the fourth paragraph. For instance, Lizzie's anecdote about prostitution in the cafe where Prior ate in. She mentioned about a pro advising a lass and one of her quotes was "...if a man winks at you, wink back and go with him and let him have what he wants and charge him 7/6". In a detailed analysation, during WWI, the women of society were never expected to be seen talking so vulgarly about such sensitive subjects like prostitution and sex openly. Women were normally seen as soft, polite and decent beings. However, ever since the war started, the changes in attitudes in women became distinctly different. Besides that, in page 88, Sarah Lumb went up to Prior and spoke to him first. "You'll get hiccups", she said. This shows that women are more empowered than they were before unlike men that are the total opposite of what they are supposed to be which is strong, tough and brave, the qualities that are long gone after the war started. ...read more.

It also shows that the women were getting more freedom as the men were out in the battlefield. However, to them, it is one of the best thing that has ever happened and they actually want the men to leave to war. They're appreciating their freedom and making the most out of it as the men were at war, dying and getting hit by shells, the women were here, laughing and talking about sex. This shows that the women's roles are changing and becoming clearer and clearer. We also noticed that the women were actually working in this extract. Before the war started, women were obligated to stay at home to do housework such as sewing, cleaning, cooking, and taking care of all their husband's needs while the role of earning money was only applicable to men. In conclusion, the war gave women the opportunity to work and to earn have their own income without depending on men's help - which is something they have never done before In another case, Barker revealed the personality of Sassoon through the method of characterization when he talked about what he felt in the conversation between himself and Rivers in page 202 -"like a precipice on a country road". ...read more.

He constantly thinks that his opinions were the only ones that mattered all the time and that is the reason that got him in to Craiglockhart since the beginning of the novel. Besides that, the extract also shows that men are becoming more and more vulnerable to face issues through Sassoon's character because men were supposed to be tough to endure difficulties even if it was against their principles. Men's duty was to their country at that time during WWI and they were compelled to follow orders from the officers without questioning them. However, Sassoon did not want to conform to the war as he should be. In the last paragraph, Rivers said "It's time you grew up. Started living in the real world" to Sassoon, it makes the readers feel as if Sassoon was not matured in his decisions and actions all this while. In conclusion, Barker's presented the role of men and women were changing, and their attitudes towards sex and sexuality were transforming as well, through these extracts to make the readers understand that traditional social barriers have been expanded and eradicated as results of the war. ...read more.