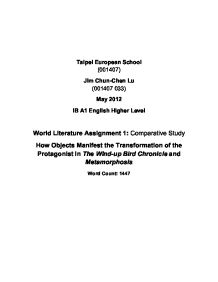 Taipei European School (001407) Jim Chun-Chen Lu (001407 033) May 2012 IB A1 English Higher Level World Literature Assignment 1: Comparative Study How Objects Manifest the Transformation of the Protagonist in The Wind-up Bird Chronicle and Metamorphosis Word Count: 1447 Objects are key to the development of the plot of The Wind-up Bird Chronicle and Metamorphosis and often give insight into the transformation of characters. The authors, Haruki Murakami and Franz Kafka use objects as symbols to reflect both physical as well as mental change and transformation in the protagonist. In The Wind-up Bird Chronicle there are many objects of significance but most notably, the symbols of the cat, wig, baseball bat, rope ladder, and Cinnamon's computer system reveal underlying forces that manipulate Toru. In Metamorphosis, Gregor is confined to his home for the greater part of the story and comes in contact with fewer objects but the symbols of food and furniture are noteworthy for their embodiment of Gregor's physical metamorphosis into a cockroach as well as his mental shift from human to animal. The cat, in the beginning of The Wind-up Bird Chronicle, is the one responsible for setting off the chain of events when it left Toru's house. This signified the change of the 'flow' around Toru's house. Malta Kano tells Toru: "Cats are very sensitive creatures... perhaps the flow has changed... you will never find the cat in that neighborhood" 1. ...read more.

eyes watering with satisfaction"2. Kafka created this strong image by juxtaposing the rotten food with the image Gregor's felicity. The effect of the image is of disgust towards Gregor. This image seems to signify both self-acceptance of his metamorphosis, as well as his family spiritually disowning him as a family member. He embraced his identity as a cockroach because he accepted food that is "unfit for human consumption" 3 showing that he has now succumbed to his animalistic impulses and no longer sees himself as human. The stark contrast between the milk and the garbage shows the change in Grete's and the family's attitude towards Gregor: from loving him to treating him as a caged animal. At this point, he has completed his metamorphosis because now he not only has the body of a monster but the mentality of one too. Like the cat in The Wind-up Bird Chronicle the food represented change in the protagonist's environment however the change in flow in The Wind-up Bird Chronicle did not fundamentally change Toru. In The Wind-up Bird Chronicle, Toru uses a rope ladder in his first trip to the bottom of the well. He goes into the well for reconciliation and crosses over to the other world. The rope ladder represents a 'bridge' between the two sides. It is literally his lifeline and the only thing keeping Toru in touch with the normal world. ...read more.

In both texts, the protagonists often have little control over their fate, possibly due to large outside forces. In The Wind-up Bird Chronicle Nutmeg's computer embodies this idea. Nutmeg's computer was custom-built and programmed by Cinnamon and hence creates a virtual world that is almost completely under his control. "Cinnamon was absolute ruler over this three-dimensional subterranean labyrinth"3, and Toru's technological illiteracy in Cinnamon's maze reveals the protagonist's helplessness and outside forces at play, just as Gregor's fate lies in the hands of his family. Locked in his room, Gregor cannot feed himself and has to wait for Grete to clean up after him and feed him. Towards the end, the duty is neglected, and he becomes immobile after being struck by the apple. Ultimately, Gregor was not even in control of his own death, being killed by the maid. In conclusion, the use of objects is an indispensable tool for Murakami and Kafka to show changes in the protagonists and their surroundings. Changes in the environment were manifested in the cat and the wig in The Wind-up Bird Chronicle, showing how the flow has changed while food in Metamorphosis represented fundamental change of the protagonist's body and mind. The furniture in Metamorphosis as well as the rope ladder, Cinnamon's computer system, and baseball bat in The Wind-up Bird Chronicle show the protagonist's vulnerability and the strong external forces at play. These are just some of the many objects that manifest transformation in the two novels. ...read more.