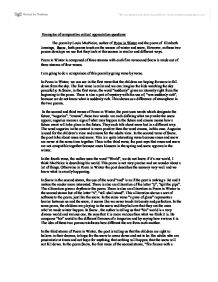 Snow and Poem in Winter

Examples of comparative critical appreciation questions The poem by Louis MacNeice, author of Poem in Winter and the poem of Elizabeth Jennings, Snow , both poems touch on the season of winter and snow. However, as these two poems develops we see that they look at this season in similar and different ways. Poem in Winter is composed of three stanzas with each five verses and Snow is made out of three stanzas of four verses. I am going to do a comparison of this poem by going verse by verse. In Poem in Winter, we can see in the first verse that the children are hoping for snow to fall down from the sky. The first verse is calm and we can imagine the kids watching the sky peacefully. In Snow, in the first verse, the word "suddenly" gives an intensity right from the beginning to the poem. ...read more.

In the fourth verse, the author uses the word "World", we do not know if it's our world, I think MacNeice is describing his world. This poem is not very precise and we wonder about a lot of things. Otherwise in Poem in Winter the poet describes the scenery very well and we know what is exactly happening. In Snow in the second stanza, the use of the word "and" is as if the poet is making a list and it makes the reader more interested. There is also an alliteration of the letter "p", "spit the pips". The alliteration gives a rhythm to the poem. There is also an alliteration in Poem in Winter in the second stanza but of the letter "s", "still shall stand". This alliteration shows a sort of softness to the poem, just like the snow. In the same verse "a pane of glass" represents a barrier between us and the snow, it seems like we never touch its beauty and perfection. ...read more.

Fire does not make a bubbling sound but a crackling sound, but it is when snow melts that we hear a bubbling sound, so this means that in this fire, there is snow. The author is also saying that even though how various "his" world is, that it can be a happy world. In the last verse MacNeice says, "There is more than glasses between the snow and the huge roses", he is basically saying that snow and pink roses are very different from each other. The roses and the snow are a microcosm of "his" world. In conclusion, these two poems talk about snow but in a very different way. In Poem in Winter, Jennings is showing us its beauty and its perfection but in Snow, MacNeice is using the snow to show how contrasting "his" world is and maybe he talking about our world. In Snow, the narrator's use of imagery, variations and language is very precise and makes the poem very interesting. Poem in Winter is a very precise poem and a very good example of the imagery. . ...read more.