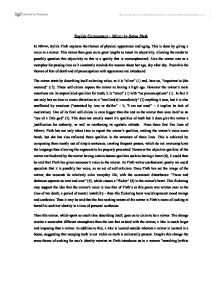 English Commentary - Mirror by Sylvia Plath In Mirror, Sylvia Plath explores the themes of physical appearance and aging. This is done by giving a voice to a mirror. This mirror then goes on to great lengths to assert its objectivity, allowing the reader to possibly question this objectivity as this is a quality that is overemphasized. Also the mirror acts as a metaphor for passing time as it constantly reminds the woman about her age, day after day. From this the themes of fear of death and of preoccupation with appearance are introduced. The mirror starts by describing itself as having value, as it is "silver" (1) and, later on, "important to [the woman]" (15). These self-claims expose the mirror as having a high ego. However the mirror's main assertions are its unparalleled qualities for truth; it is "exact" (1) ...read more.

However the objective qualities of the mirror are hindered by the mirror having certain human qualities such as having a heart (8), it could then be said that Plath has given someone's voice to the mirror. As Plath writes confessional poetry we could speculate that it is possibly her voice, as an act of self-criticism. Once Plath has set the image of the mirror, she recounts its relatively calm everyday life, with the occasional disturbance: "Faces and darkness separate us over and over" (9), which causes a "flicker" (8) in the mirror's heart. This flickering may support the idea that the mirror's voice is also that of Plath's as this poem was written near to the time of her death, a period of mental instability - thus this flickering heart would represent mood swings and confusion. ...read more.

The candles and the moon are both sources of light, which help one see in the dark but do not provide accurate representations as shadow plays arise and only reveal a soft image. However these two objects are also romantic allusions, thus Plath, through her use of ambiguity, is reflecting on romantic relationships and the disappointments they bring despite seeming appealing at first. If we are correct about the mirror's voice being Plath's, this reflection would relate to Plath's severing relationship with Ted Hughes and be a mean of representing her disappointment. However, whichever path she takes to seek for her identity she finds deception. However one is truthful and the other is plainly described as a liar. Nonetheless this woman ends up consulting the mirror in a Snow White-like way despite being angered by what she sees in the lake's reflection. This underlines her obsession with beauty as she prefers the truth rather than deceit even if the truth is painful. However this beauty is something that disappears over time, an attribute of youth. ...read more.