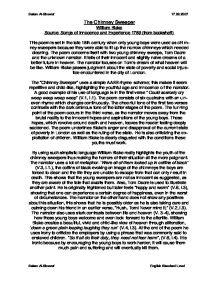 The Chimney Sweeper William Blake Source: Songs of Innocence and Experience 1789 (from bookshelf) This poem is set in the late 18th century when only young boys were used as chimney sweepers because they were able to fit up the narrow chimneys which needed cleaning. The poem concerns itself with two young chimney sweeps, Tom Dacre and the unknown narrator. It tells of their innocent and slightly naive dreams of a better future in heaven. The narrator focuses on Tom's dream of what heaven will be like. William Blake passes judgment about the state of poverty and social injustice encountered in the city of London. The "Chimney Sweeper" uses a simple AABB rhyme scheme; this makes it seem repetitive and child-like, highlighting the youthful age and innocence of the narrator. A good example of his use of language is in the first verse "Could scarcely cry weep weep weep weep" (V.1, l.1). The poem consists of six quatrains with an uneven rhyme which changes continuously. ...read more.

This shows that the young sweepers are not as innocent as suggested, as they are aware of the fate that awaits them. Also, Tom Dacre is used to illustrate another point. He is originally frightened but later feels "happy and warm" (V.6, l.3), showing that one can experience a certain degree of happiness, even in the worst of circumstances. The narrator on the other hand does not show any positives about his situation, this shows that he is possibly older as he is also taking care and calming down his friend in an earlier verse, "Hush, Tom! Never mind it," (V.2, l.3). The narrator also uses stark contrasts between life and heaven (V. 3-4), showing how these young boys welcome and even look forward to the afterlife. William Blake creates a beautiful, vivid and child-like view of heaven through alliteration, 'down a green plain leaping laughing they run' (V.4, l.3). At the end of the poem he uses irony to criticize the employers by using a phrase that was commonly said to enslaved children. ...read more.

never mind it, for when your head's bare, You know that the soot cannot spoil your white hair." And so he was quiet; and that very night, As Tom was a-sleeping, he had such a sight, - That thousands of sweepers, Dick, Joe, Ned, and Jack, Were all of them locked up in coffins of black. And by came an angel who had a bright key, And he opened the coffins and set them all free; Then down a green plain leaping, laughing, they run, And wash in a river, and shine in the sun. Then naked and white, all their bags left behind, They rise upon clouds and sport in the wind; And the angel told Tom, if he'd be a good boy, He'd have God for his father, and never want joy. And so Tom awoke; and we rose in the dark, And got with our bags and our brushes to work. Though the morning was cold, Tom was happy and warm; So if all do their duty they need not fear harm. ?? ?? ?? ?? Salem Al-Shawaf 17.09.2007 Salem Al-Shawaf 17.09.2007 Salem Al-Shawaf English Standard Level Salem Al-Shawaf English Standard Level ...read more.