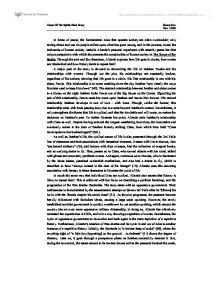 In times of peace, the fundamental rules that operate society are often overlooked; only during chaos and war do people reflect upon what has gone wrong, and in the process, reveal the intricacies of human society. Isabelle Allende's personal experience with anarchy grants her that unique perspective with which she presents the complexities of human society in The House of the Spirits. Through the plot and the characters, Allende explores how life goes in circles, how events are intertwined and how history tends to repeat itself. A major part of the story is devoted to chronicling the life of Esteban Trueba and his relationships with women. Through out the plot, his relationships are repeatedly broken, regardless of his actions; showing that life goes in a circle. His first relationship is one with his sister, Ferula. This relationship is to come crashing down the day Esteban "saw clearly the ways his sister used to keep him down" (43). The strained relationship between brother and sister comes to a climax on the night Esteban kicks Ferula out of the Big House on the Corner. ...read more.

This is achieved with her focus on describing a political backdrop, and the progression of the Tres Marias Haciendas. The story starts with an oppressive government. Their ruthlessness is demonstrated by the assassination attempt on Severo del Valle after he "[threw] his lot in with the liberals despite his social class" (31). As the plot progresses, the peasants become heavily influenced with Socialism ideals, causing a large scale up-rising. However, the newly established socialist government is quickly overthrown by yet another up-rising, which returns the country into an even more oppressive military dictatorship. In doing so, Allende has effectively recreated her experiences in Chile, and is in a way showing a repetition of events. Nonetheless, the cycle of oppressive government to revolution and back again is the main depiction of a repetitive history. Furthermore, Allende's creation of Tres Marias and its cycle in and out of ruins is another instance of a repetitive history. Initially, the Hacienda is "a lawless heap of rocks" (48), where the revolting sight of "a little boy [squatting] on the ground... ...read more.

In this way, it is ironic how Esteban's one mistake is made up for by his other flaw. Through out the plot, these two parallel chains of events are themselves intertwined as well as with each other. Allende uses this subtle approach to effectively demonstrate how even the seemingly unrelated instances in human society are inseparable from each other. By exploring the cyclical nature of life, the repetition of history and the interrelationship between events through the plot and characters in House of the Spirits, Isabel Allende asserts the complexity of human society. By relating the novel to her life, one finds the cause for chaos and anarchy; as Alba concludes, "revenge...[is] just another part of the same inexorable rite" (432), a terrible chain that must be broken. The irony of this revelation is that the same principles that allow human societies to function are also responsible for its dysfunctions, which again reinforces the theme of the complexity of society. House Of The Spirits Final Essay Jimmy Cao Nov. 15/08 ...read more.