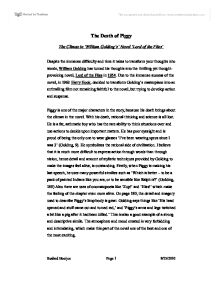 The Death of Piggy

The Death of Piggy The Climax in 'William Golding's' Novel 'Lord of the Flies' Despite the immense difficulty and time it takes to transform your thoughts into words, William Golding has turned his thoughts into the thrilling yet thought-provoking novel, Lord of the Flies in 1954. Due to the immense success of the novel, in 1963 Harry Hook, decided to transform Golding's masterpiece into an enthralling film not remaining faithful to the novel, but trying to develop action and suspense. Piggy is one of the major characters in the story, because his death brings about the climax in the novel. With his death, rational thinking and science is all lost. He is a fat, asthmatic boy who has the rare ability to think situations over and use actions to decide upon important matters. He has poor eyesight and is proud of being the only one to wear glasses 'I've been wearing specs since I was 3' (Golding, 9). ...read more.

I believe that Hook does a good job of developing action and showing visuals that we could only imagine and visualize by reading. In Hook's film interpretation, Piggy's death is much more violent and much more significant. This is because when Piggy dies, the chase scene, following this one is very powerful, with slow-motion techniques and tracking shots. The Death of Piggy Scene starts of with a slow tracking shot of Ralph (Balthazar Getty) and Piggy (Danuel Pipoly) climbing up Castle Rock to get Piggy's glasses. Non-Diegetic sound is playing in the background establishing a fore coming danger. A low-angle shot shows Jack (Chris Furrh) and the hunters on high ground and quickly followed by a high-angle shot showing Ralph and Piggy on the ground. This shows that the power lies in the hunters hands. Then an over the shoulder shot is used as Ralph surveys his surroundings. Suddenly the camera takes a long neutral, close-up of Roger (Gary Rule), showing that he would be significant in this scene. ...read more.

He falls off the cliff and lands in the ocean. However, in Hooks version, he just lies where he got hit and stays there. In addition when he dies in the film, we don't see the conch being shattered even though this is a very significant part. This is because the conch is the symbol for rational behavior on the island and with that shattered; Ralph doesn't have anything against Jack to show his power and leadership. Despite the differences, both the novel and the film have their own distinct personalities which make each one of them even more exciting. So in conclusion, despite Hook not remaining faithful to the novel, he did a very good job of developing action and suspense, which is much harder to write than to visually present. The stylistic film techniques made the death of Piggy almost seem real. However, Golding's world wide success 'Lord of the Flies' could, and should have many more interpretations in film and drama. We know for sure, that there is a lot more to the novel than just action and suspense. ?? ?? ?? ?? Rushad Heerjee Page 1 9/25/2010 ...read more.