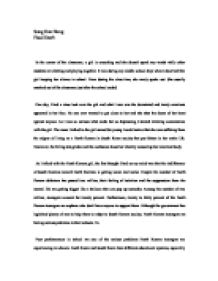 The more I talked to the girl named Su young I could notice that she was suffering from the stigma of living as a North Korean in South Korea society that put fetters in her entire life. Moreover, the failing test grades and the confusion about her identi

Sung Eun Hong Final Draft In the corner of the classroom, a girl is crouching and she doesn't speak any words while other students are chatting and playing together. It was during my middle school days when I observed that girl keeping her silence in school. Even during the class time, she rarely spoke out. She usually sneaked out of the classroom just after the school ended. One day, I had a close look over the girl and what I saw was the devastated and lonely emotions appeared in her face. No one ever wanted to get close to her and she shut the doors of her heart against anyone. As I was so curious what made her so depressing, I started initiating conversation with the girl. The more I talked to the girl named Su young I could notice that she was suffering from the stigma of living as a North Korean in South Korea society that put fetters in her entire life. Moreover, the failing test grades and the confusion about her identity messed up her mind and body. ...read more.

However, the policy is mainly about thrusting them in the South Korean education system, urging them to absorb the knowledge as much as possible. Instead of forcing them to transform to perfect South Korea minded students, the teachers of schools and the educational department should consider other supplementary methods to encourage North Korean teenagers to get interests in learning and experiencing diverse activities such as club in schools. Other than the poor performances, North Korean teenagers are in conflicts with peers in school and daily lives. The reasons for the conflicts are the different language usage, values and cultures. The sixteen year old North Korean defector, living in Seoul, once mentioned in the interview that "I couldn't face the peers in school because I was so afraid of every new thing. Also, I couldn't understand some slang that was going around the classroom most of the time." She also said, "It's been five years since I came to Korea, and I still don't know how I should play with South Korean teenagers." ...read more.

Toward the concerns appearing to North Korean teens, not only the government, teachers and schools are responsible for setting other devices or projecting other things for both North and South Koreans. Furthermore, parents of both Koreas and the students themselves should know and care for each other. It is also the responsibility of elders that can give advices to students. Teenagers are called to be the "future" of the country. Within few years, they take part in society and counterpart with the new world. However, the teen period would spoil the entire life unless they are supported or be cared by others. North Korean teens are suffering from lack of care and backing. North Korean defectors are people we meet just before we meet with North Koreans. No matter if the two Koreas reunify or not, the harmony with North Korean defectors and South Koreans would contribute to another peace. North Korean defectors would provide information to our society and it will be great chances to understand the North Korean society. Their experiences that we couldn't access are precious resources for the unification of two Koreas. Particularly, the reunion of North and South Korean teenagers implies a better society with less conflicts and constraints. ?? ?? ?? ?? ...read more.