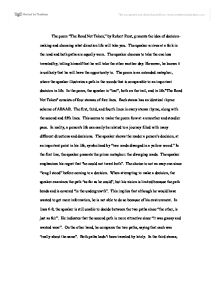 The poem "The Road Not Taken," by Robert Frost, presents the idea of decision-making and choosing what direction life will take you. The speaker arrives at a fork in the road and both paths are equally worn. The speaker chooses to take the one less traveled by, telling himself that he will take the other another day. However, he knows it is unlikely that he will have the opportunity to. The poem is an extended metaphor, where the speaker illustrates a path in the woods that is comparable to an important decision in life. In the poem, the speaker is "lost", both on the trail, and in life."The Road Not Taken" consists of four stanzas of five lines. ...read more.

In the first line, the speaker presents the prime metaphor: the diverging roads. The speaker emphasizes his regret that "he could not travel both". The choice is not an easy one since "long I stood" before coming to a decision. When attempting to make a decision, the speaker examines the path "as far as he could", but his vision is limited because the path bends and is covered "in the undergrowth". This implies that although he would have wanted to get more information, he is not able to do so because of his environment. In lines 6-8, the speaker is still unable to decide between the two paths since "the other, is just as fair". He indicates that the second path is more attractive since "it was grassy and wanted wear". ...read more.

In the future, he will say that the paths were different from each other and that he had bravely chose the path "less traveled by". In actuality, I believe this poem can relate to the everyday life of humans. In life, everyone is constantly faced with situations in need of decisions. Each situation comes with decisions that must be made to make life more rewarding and meaningful. Once the decision is made, the "fork in the road" has passed and life will go on. The speaker reminds the reader of these important decisions or choices in life and how those decisions will affect the future. After it all, we reflect over the decisions we have made, and like the speaker at the end of this poem, we find that those decisions have made "all the difference" to our lives. ...read more.