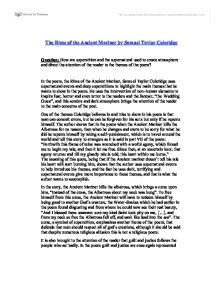 The Rime of the Ancient Mariner by Samuel Taylor Coleridge Question: How are superstition and the supernatural used to create atmosphere and direct the attention of the reader to the themes of the poem? In the poem, the Rime of the Ancient Mariner, Samuel Taylor Coleridge uses supernatural events and deep superstitions to highlight the main themes that he wants to show in the poem. He uses the intervention of non-human elements to inspire fear, horror and even terror to the readers and the listener, "the Wedding Guest", and this sombre and dark atmosphere brings the attention of the reader to the main concerns of the poet. One of the themes Coleridge believes in and tries to show in his poem is that man can commit errors, but he can be forgiven for his acts but only if he repents himself. ...read more.

Since then, at an uncertain hour, that agony returns: and till my ghastly tale is told, this heart within me burns." The meaning of this quote, being that if the Ancient mariner doesn't tell his tale his heart will start burning him, shows that the author uses supernatural events to help introduce his themes, and the fact he uses dark, terrifying and supernatural events give more importance to those themes, and that is what the author wants to accomplish. In the story, the Ancient Mariner kills the albatross, which brings a curse upon him, " Instead of the cross, the Albatross about my neck was hung". To free himself from this curse, the Ancient Mariner will have to redeem himself by being good to another God's creature, the Water-Snakes which he had earlier ...read more.

It is also brought to the attention of the reader that guilt and justice follows the people who act badly. In the poem guilt and justice are once again represented by unnatural phenomena: "The wan stars danced between ?...? The moon was at its edge, ?...?, The lightning fell with never a jag, a river steep and wide.", and by the surreal deathly-pale woman who decide upon the men's fate. There are plenty of other sombre images in Coleridge's poem, and even the description of the weather look bizarre and make the reader very uncomfortable. They all contribute to an atmosphere which makes the poem more dramatic and touching. This will bring out the themes, the lessons that the author wants to introduce to the reader. ...read more.