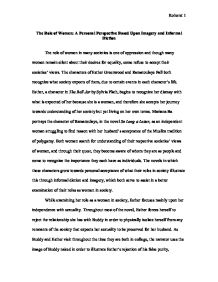 The Role of Women: A Personal Perspective Based Upon Imagery and Informal Diction

The Role of Women: A Personal Perspective Based Upon Imagery and Informal Diction The role of women in many societies is one of oppression and though many women remain silent about their desires for equality, some refuse to accept their societies' views. The characters of Esther Greenwood and Ramatoulaye Fall both recognize what society expects of them, due to certain events in each character's life. Esther, a character in The Bell Jar by Sylvia Plath, begins to recognize her dismay with what is expected of her because she is a woman, and therefore she accepts her journey towards understanding of her society but yet living on her own terms. Mariana Ba portrays the character of Ramatoulaye, in the novel So Long a Letter, as an independent woman struggling to find reason with her husband's acceptance of the Muslim tradition of polygamy. Both women search for understanding of their respective societies' views of women, and through their quest, they become aware of whom they are as people and come to recognize the importance they each have as individuals. The novels in which these characters grow towards personal acceptance of what their roles in society illustrate this through informal diction and imagery, which both serve to assist in a better examination of their roles as women in society. ...read more.

Esther does not feel changed through this experience, and recognizes that her sexuality does not give her the independence from obeying society's laws, but instead understands that she can disobey society whenever she pleases. As she is with Irwin, the man with whom she has the affair, she thinks to herself "I had no idea if this was proper, but after months of wholesome, dull asylum diet, I was greedy for butter," showing her almost necessity to leave the asylum and experience life on her own terms (Plath 227). This is not a malevolent attempt at disagreeing with society, but instead a personal realization that she is personally responsible for her actions. Although it may be argued that Esther is not mentally well, she maintains the stance that she will not be told how she should act throughout the entirety of the novel, which enables the constant reexamination of Esther's role within society. Through her consistent will to keep her sexuality independent, she finally is able to examine how she can live within society while maintaining her independence from what is expected. As with Esther, Ramatoulaye experiences her own examination of her role as a woman in her society through epistolary structure of her letters to her close friend. ...read more.

I would feign indifference, while anger hammered against my nerves and the tears I held back welled up behind my eyes" (Ba 51). She becomes aware of her husband's flaws but is able to recognize her friend Aissatou's husband who maintains respect for his wife. Therefore, with her journey through letters with her friend, Ramatoulaye is able to personally grow towards her own understanding of how she must submit to her religion while stile fighting for her independence. Both Esther and Ramatoulaye examine their roles in society through the role of sexuality within their lives. With personal connections, the narrator is able to use imagery and informal diction to more closely allow relation to the characters and their struggles. With the comparison between Esther and Ramatoulaye, one is able to see the differences between the situations but yet draw a parallel between their struggles towards becoming independent from societies they both see as oppressive toward women. Through their journey toward independence, they both realize and understand the importance of self-discovery. Esther falls into a state of schizophrenia and this symbolizes her struggle with society's acceptance that she must be pure for her marriage. Ramatoulaye questions her most sound doctrine, her religion, in order to examine her role as a wife to a man that chooses polygamy. Through these struggles, the women are able to more wholly understand how to live within the society while still fighting against it. ...read more.