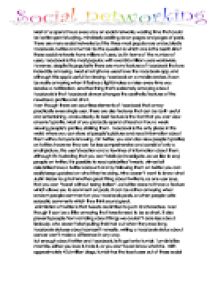 There are many social networks but the three most popular are undoubtedly Facebook, twitter and tumblr. So the question is which one is the best?

Most of us spend hours every day on social networks, wasting time that could be better spent studying, mindlessly scrolling down pages and pages of posts. There are many social networks but the three most popular are undoubtedly Facebook, twitter and tumblr. So the question is which one is the best? All of these social networks have millions of users, but in terms of the number of users, Facebook is the most popular, with over 845 million users worldwide. However, despite its popularity there are many features of Facebook that are incredibly annoying. Most smart phone users have the Facebook app, and although this app is useful for viewing Facebook on a mobile device, it can be really annoying when it flashes a light/makes a noise every time you receive a notification. ...read more.

Almost all celebrities have a twitter account and by following them on twitter you can easily keep updated on what they're doing. Who doesn't want to know what Justin Bieber is up to? Another great thing about twitter is, as one user says, that you can "tweet without being trolled", as twitter does not have a feature which allows you to comment on posts. It can be rather annoying when random people comment on your Facebook posts, or when people write sarcastic comments which they think sound great. A limitation of twitter is that tweets are limited to just 140 characters. Even though it can be a little annoying that tweets need to be so short, it also prevents people from rambling about things we couldn't care less about. Seriously, who doesn't start pulling their hair out when they read long Facebook statuses about cancer? ...read more.

"Its creepy to get to know random people, what if they're 40 year old men?, one non-tumblr user says. Though it's possible that the people you're talking are 40 year old men, it's still completely safe to talk to them since none of your personal information, such as your name, is displayed on your blog. One tumblr user even posted a picture of a screenshot of a facebook status saying "I trust complete strangers on tumblr more than you hypocritical (bleep)". And yes, it is possible to send anonymous hate mail on tumblr, however a tumblr user may only receive anonymous hate mail if they have enabled anonymous messages. So which social network is really the best? Well, that's up to you to decide, but for the perfect social networking experience, use all three sites. ...read more.