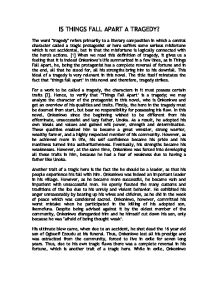 IS THINGS FALL APART A TRAGEDY? The word "tragedy" refers primarily to a literary composition in which a central character called a tragic protagonist or hero suffers some serious misfortune which is not accidental, but in that the misfortune is logically connected with the hero's actions. [1] When we read this definition of tragedy, it gives us a feeling that it is indeed Onkonkwo's life summarized in a few lines, as in Things Fall Apart, he, being the protagonist has a complete reversal of fortune and in the end, all that he stood for, all his strengths bring him to his downfall. This ideal of a tragedy is very relevant in this novel. The title itself reinstates the fact that 'things fall apart' in this novel and therefore, tragedy strikes. For a work to be called a tragedy, the characters in it must possess certain traits [2]. Hence, to verify that "Things Fall Apart' is a tragedy; we may analyze the character of the protagonist in this novel, who is Onkonkwo and get an overview of his qualities and traits. ...read more.

Onkonkwo was indeed an important leader in his village. However, as he became more successful, he became vain and impatient with unsuccessful men. He openly flouted the many customs and traditions of the Ibo due to his unruly and violent behavior. He exhibited his anger unreasonably by beating up his wives and children, as he did in the week of peace which was considered sacred. Onkonkwo, however, committed his worst mistake when he participated in the killing of his adopted son, Ikemefuna. Despite being advised against it by the oldest member of the community, Onkonkwo disregarded him and he himself cut down his son, only because he was 'afraid of being thought weak'. His ultimate blow came, when due to an accident, he shot dead the 16 year old son of Ogbuefi Ezeudu at his funeral. Thus, Onkonkwo lost all his prestige and was ostracized from the community, forced to live in exile for seven long years. ...read more.

According to Aristotle, a tragedy must also have consistency, which this novel certainly does have, since Onkonkwo, the main character in this work, consistently remains true to himself. Onkonkwo throughout the book stands up for himself, his beliefs and his community. And although he possesses his own shares of flaws, he also has some good traits in him, which proves that he did not really deserve this fate. This arouses pity and empathy for him amongst the readers. In conclusion, we can clearly say that Chinua Achebe's 'Things Fall Apart' is a classical example of a tragedy. However, it is not only about the main protagonist's personal tragedy but also about the tragic destruction of the Ibo, the tribe to which Onkonkwo belonged. This tragedy is caused because the people, themselves turn away from their own traditional gods and culture. Thus, the causes of this tragedy are inherent within the culture itself and the tragic element in this book has truly enhanced it even more. ...read more.