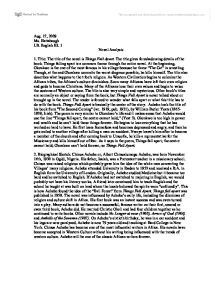 Aug. 17, 2009 Ms. Hattabaugh I.B. English HL 1 Novel Analysis 1. Title: The title of the novel is Things Fall Apart. The title gives foreshadowing details of the book. Things falling apart is a common theme through the entire novel. At the beginning, Okonkwo is the one of the most famous in his village because he threw "The Cat" in wrestling. Though, at the end Okonkwo commits the worst disgrace possible, he kills himself. The title also describes what happens to the tribe's religion. As Western Civilization begins to colonize the African tribes, the African's culture diminishes. Soon many Africans have left their own religion and gods to become Christians. Many of the Africans lose their own values and begin to value the customs of Western culture. The title is also very simple and mysterious. Other book's titles are normally an object or saying from the book, but Things Fall Apart is never talked about or brought up in the novel. The reader is forced to wonder what falls apart or what this title has to do with the book. Things Fall Apart is basically the center of the story. Achebe took the title of his book from "The Second Coming" (wr. 1919; pub. 1921), by William Butler Yeats (1865-1939; Irish). The poem is very similar to Okonkwo's life and it makes sense that Achebe would use the line "Things fall apart; the centre cannot hold;" (Yeat 3). Okonkwo is too high in power and wealth and he can't hold those things forever. He begins to lose everything that he has worked so hard to have. He first loses Ikemefuna and becomes depressed and angry, and then he gets exiled to another village after killing a man on accident. Nwoye leave's him after to become a member of the church and after coming back to Umuofia, he kills a representative for the Missionary and kills himself out of fear. ...read more.

Okonkwo often wishes Ezinma was a man. Ekwefi, Ezinma's mother is constantly worried about losing her only child because she has had miscarriage many of times. The bond between her and Ezinma is very strong and she treats Ezinma with rare foods like eggs that are meant for special occasions. She is the second wife of Okonkwo. Priestess or Chielo, the Oracle of the Hills and Caves is around a lot but as two different people. During the day she is around the village as Chielo and is one of the normal women. She goes to the market and events in the village but at night she becomes the Oracle of the Hills and Caves and it's like she is taken over by another power. She taught Ekwefi a lesson about being too close with her child and she is also a representative for the Gods. Reverend James Smith, very mean and strict replacement for Mr. Brown. He causes much grief throughout the village and causes many problems with the people of Umuofia. Okonkwo kills himself because of Smith's actions. The District Commissioner, he appears at the end of the novel and doesn't really know about the customs of the people. He summarizes the entire novel from a westerner's point-of-view. 6. Symbols: 1. Yams- Yams in Things Fall Apart were a very big deal to Okonkwo. The yams symbolized what Okonkwo wanted the most for his family, masculinity. Yams were a job for men only; women could grow other fruits or vegetables but yams were what real men grew because they required hard work. Yam didn't just symbolize a man's masculinity but they also provided food and an income. The Yams were what Okonkwo wanted the most for his family and it was what he grew the most of. 2. Locusts- The locusts in Things Fall Apart symbolized something new coming. In the book, it was said the locusts only visited the Umuofia only once a generation. ...read more.

In fact, those who colonized Africa find themselves to be heroes because they "saved" the Niger villages from Hell and allowed them to go to Heaven. 10. Additional Comments: I found the book to be very interesting because it broke away from the somewhat normal books we read in school. Thing Fall Apart was an actual world literature instead of the books that are set in western civilization. Achebe made this book so we could see the antagonists we have become, as a culture, to those in foreign countries. As Americans, we normally think that we're saving these people in other cultures or that we're doing more good than harm. But with this novel, it shows that colonizing foreign counties is destroying other cultures rather than helping them. As I read this book, I continued to say, "Wow, this book is pretty tribal" but it's actually quite opposite. The people in Umuofia were less tribal before the westerners came. With the colonization it made many of the villagers do things they would never do; like kill a sacred object or burn a building down because of hate. The ending is also very surprising to me. Seeing how the District Commissioner saw the African tribes, I would have seen the tribes the same way if I saw the story from a missionary's point of view. You don't truly see how another culture is until you see it from their eyes and I think Achebe accomplished that very well. He made it possible for the reader to experience the culture of African tribes in the early 1900's and be able to relate this foreign culture to their daily lives. We can take an example or a theme that the African's had to deal with and use it in our daily lives. I found the theme of masculinity to be the most relatable for any high school boy. Achebe also showed that no matter the time or place, humans will still have things in common. Even though we are in separate countries, environments and times, we still have the same human elements, like emotions, in common. ...read more.