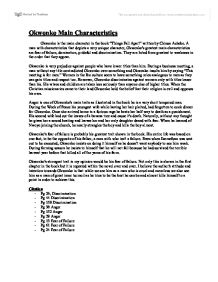 Okwonko Main Characteristics Okwonko is the main character in the book "Things Fall Apart" written by Chinua Achebe. A man with characteristics that depicts a very unique character, Okwonko's greatest main characteristics are fear of failure, domination, prideful and discrimination. They are listed from greatest to weakness in the order that they appear. Okwonko is very prejudice against people who have lower titles than him. During a business meeting, a man without any title contradicted Okwonko over something and Okwonko insults him by saying "This meeting is for men." ...read more.

Anger is one of Okwonko's main traits as illustrated in the book he is a very short tempered man. During the Week of Peace his youngest wife while having her hair plaited, had forgotten to cook dinner for Okwonko. Once she arrived home in a furious rage he beats her half way to death as a punishment. His second wife had cut the leaves of a banana tree and cause it's death. Naturally, without any thought he gives her a sound beating and leaves her and her only daughter dazed with fear. ...read more.

During farming season he insists to himself that he will not fail because he had survived the terrible harvest year before that killed all of the yams of his farm. Okwonko's strongest trait in my opinion would be his fear of failure. Not only this is shown in the first chapter in the book but it is repeated within the novel over and over. I believe the author's attitude and intention towards Okwonko is that while we see him as a man who is cruel and merciless we also see him as a man of great inner turmoil as he tries to be the best he can be and almost kills himself to a point in order to achieve this. ...read more.