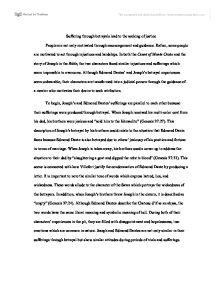 Suffering through betrayals lead to the seeking of justice People are not only motivated through encouragement and guidance. Rather, some people are motivated to act through injustices and hardships. In both the Count of Monte Cristo and the story of Joseph in the Bible, the two characters faced similar injustices and sufferings which seem impossible to overcome. Although Edmond Dantes' and Joseph's betrayal experiences seem unbearable, their characters are transformed into a judicial person through the guidance of a mentor who motivates their desire to seek retribution. To begin, Joseph's and Edmond Dantes' sufferings are parallel to each other because their sufferings were produced through betrayal. When Joseph received his multi-color coat from his dad, his brothers were jealous and "sold him to the Ishmaelite" (Genesis 37:27). This description of Joseph's betrayal by his brothers could relate to the situation that Edmond Dante faces because Edmond Dante is also betrayed due to others' jealousy of his position and fortune in terms of marriage. ...read more.

Edmond Dantes and Joseph not only exhibit similarities in their sufferings but also demonstrate their transformation to a judicial person through guidance of a mentor. When Dante is in his lowest point in life, he encounters a revival of hope. With the help of Abbe Faria, Dante endure his hardship and he "learns mathematics, physics, history" (Dumas 49). Abbe Faria is the one person who reveals all the knowledge of this world to Dante so that he would grow wise. However, Dante is imprinted with an attitude of vengeance and hatred. In essence, Abbe Faria is a representative of God who cares and does everything for the good of his disciple. The true transformation of Dantes into a judicial person was when he was "[dragged] to the bottom by a cannon ball [tied] to his feet" (Dumas 66). The cannonball tied to Dantes represents his old and na�ve self. When Dantes cuts off the rope holding the cannonball and rises up, his old self dies away in the sea, and he resurrects into a vengeful and judgmental man. ...read more.

However, Dantes' new attitude toward justice is carried out to the extreme as he hurts other people in the process. Likewise, Joseph demonstrate himself as a judicial individual by seeking retribution from his brothers while not taking vengeance. Joseph exercises his grace when his brothers recognized their wrongdoings and sought his forgiveness. Joseph make sure justice was sought through his brothers' repentances, resulting in Joseph's open arms of forgiveness, kindness and reconciliation. Both Joseph and Dante reveal their character of judicial through their transformation but they show different degrees of justice. To conclude, Joseph and Dante exhibit transformation from an innocent and na�ve person to a judicial individual through betrayals that they faced and help from a guide. Both Dantes' and Joseph's sufferings create a yearning of justice but only with the help of the mentor, their character is transformed with justice. This aspect of creating benefits out of suffering is indeed a great feat. However, those who take justice a step further will lose sight of its purpose and fall into the wrong path of revenge. ...read more.