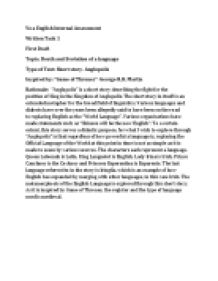 Topic: Death and Evolution of a language Type of Text: Short story- Anglopolis Inspired by: Game of Thrones-

﻿Ve a English Internal Assessment Written Task 1 First Draft Topic: Death and Evolution of a language Type of Text: Short story- Anglopolis Inspired by: ?Game of Thrones?- George R.R. Martin Rationale: ?Anglopolis? is a short story describing the fight for the position of King in the Kingdom of Anglopolis. The short story in itself is an extended metaphor for the broad field of linguistics. Various languages and dialects have over the years been allegedly said to have been on the road to replacing English as the ?World Language?. Various organizations have made statements such as ?Chinese will be the new English?. To a certain extent, this story serves a didactic purpose, for what I wish to explore through ?Anglopolis? is that regardless of how powerful a language is, replacing the Official Language of the World at this point in time is not as simple as it is made to seem by various sources. The characters each represent a language. Queen Lateenah is Latin, King Languelot is English, Lady Irina is Irish, Prince Cauchney is the Cockney and Princess Esperantina is Esparento. ...read more.

The strange man asked for this letter to be delivered to you immediately.? The messenger got down on one knee and presented the letter to the prince. Upon receiving the letter, the prince was slightly baffled, he didn?t recognize the seal. He unrolls it. ??O young descent of the legendary Queen Lateenah, claim thy throne, for soon you might never get it back. Languelot is a mere usurper. Anglopolis belongs to you, Royal Descent. This is your land, your castle, you shall be the ruler, you shall be spoken.? Baffled by the contents of the letter, Prince asks for his sister to be sent to his hall immediately. ?Esperantina, I believe our true identity has been revealed to us?, the prince told her calmly. ?What is this baffling assertion you are making, brother-dear? Do you feel feverish? Would you like me to call the medicine man?? scurried the princess. ?Silence!? the prince shouted. This was perhaps the first time one heard the prince raise his voice. Once the princess calmed down, the prince explained the letter to his sister, breaking it to her that the rumours were correct, they were born of Latin origins. ...read more.

Their devastated façade had played it to their advantage for they were now both eligible to rule Anglopolis, as suggested by the Elders. Soon they realised that they were not the only ones with a twisted plan, the Elders were not letting go of Anglopolis without a fight. A fight between the Prince and the Princess. Overwhelmed by the thirst of power, both Esperantina and Cauchney fought till only a quarter of Anglopolis survived, four day long war, now spoken of as the Abbreviated Battle, the King makes a miraculous recovery. The recovery was done when the King was allowed to mate with Lady Irina to give birth to Baby Iringlia. Only then, the King realised that he had the ability to give rise to more Dialects like the Prince and Princess, that he still had more to offer to Anglopolis, his reign was not yet done. Upon exiting his hall he sees the massacre which had happened while he was on his deathbed. He sees that the Anglopolis which he knew was gone and he was left to rule a new kingdom, with mostly new breeds. King Languelot had once again survived a war where his offspring tried to usurp his position. ...read more.