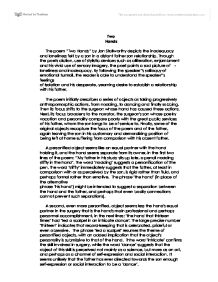 Two Hands The poem "Two Hands" by Jon Stallworthy depicts the inadequacy and loneliness felt by a son in a distant father son relationship. Through the poets diction, use of stylistic devices such as alliteration, enjambment and his vivid use of sensory imagery, the poet paints a sad picture of loneliness and inadequacy. By following the speaker''s soliloquy of emotional turmoil, the reader is able to understand the speaker''s feelings of isolation and his desperate, yearning desire to establish a relationship with his father. The poem initially describes a series of objects as taking progressively anthropomorphic actions, from nodding, to dancing and finally sobbing. Then its focus shifts to the surgeon whose hand has caused these actions. Next, its focus broadens to the narrator, the surgeon's son whose poetry vocation and personality compare poorly with the great public services of his father, whom the son longs to be of service to. Finally, some of the original objects recapture the focus of the poem and of the father, again leaving the son in his customary and demoralizing position of being left at home suffering from comparison with his absent father. ...read more.

A third, a more personified and less equal, object seems to feel unsatisfied longing for the hand's touch, in the description of a telephone as having "finally sobbed itself to sleep", . This description as a whole seems to be a projection onto the phone of the speaker's own experience of sobbing himself to sleep while waiting for his father. Perhaps both the phone and the speaker have cried out many times to be picked up by the hand. The reader cannot help but guess that a famous surgeon would have responded more reliably to the frequent cries of the phone than of his son. The surgeon owning the hand, and the speaker and his own hand, then move to he center of the poem's picture. The surgeon is clearly described as a man whose disciplined workday outlasts the phone's rings, the son's cries, and each of their sobs, because he "still has articles to read". This contrasts starkly with the speaker's first direct self-description as indecisive, undisciplined and frustrated, in the next lines: "[my] hand's indecisions keep me up cursing nightly". ...read more.

But the son's hopefulness is quickly undercut, and the poem's comparative hierarchies are clarified emphatically. First, the son observes that, even in their common "ability to write", his father's hand moves rapidly, in contrast with the son's own much slower writing movements. Next, the telephone reawakens with a spasm. In stark contrast to the speaker's interrupted thoughts, to which his father had been oblivious, the telephone causes the father to immediately drop his pen. This suggests that the father's pen - which is his only commonality that his son can imagine - is weaker than the telephone, which now determines abruptly that the father will "be out again". In this light, the telephone's previous "sobbing to sleep" now appears to be entirely a projection of the son's own sad memories. The poem has no express stanzas, which gives an impression of words and emotions tumbling out spontaneously without time for logical organization. Throughout the poem the author employs various metaphors and emotive language to depict the barrier between his father and himself and his desire for a close relationship with him. ...read more.