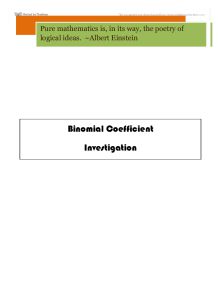 The binomial coefficients in the expansion of

We have the equation of

which is further derived from the above Triangle. I am now going to prove that this formula really work as true formula. Having prove this formula, will be able to get the subsequent number for a certain row

A fraction within a fraction, the nominator can be moved to the upper nominator

A fraction within a fraction, the nominator can be moved to the upper nominator

Both fraction has the same denominator, they can join each other

(as in the required form)

Hence we can conclude that

. I am now going to use the proved formula and algebra rules to prove that the formula is the true formula for it.

. Thus, I am able to conduce to another general formula from the sums that I was given to do. These are the three formulas:

Once I got my hands on the answer for the sums, I then proceeded onto find the formula which connect any (k +1) successive coefficients in the nth row of the Pascal Triangle with the coefficient in the (n+k)th row. Should I am able to find it; I then, with the use of algebraic rule and mathematical induction, prove the formula is true. Besides using the general elements, I directly test the formulas through real number examples. Here are the two formulas that I managed to get:

Consequently, I have to use real number sums to test these out. These are the sums that I did:

The Pascal Triangle is one in a million mathematical wonders that human can ever think of. It connects all common senses of logic and algebra rules. From it, various general formulas can be derived from, making more mathematical properties at the same make them easier to understand. More formulas means that there will be less work of calculations required, making the job of a mathematician easier.  Although it is not just Blaise Pascal that got to think of such triangle, in the years of the 13th century, an arithmetic triangle which looks and works exactly in the same way as the Western Pascal triangle was produced by a Chinese mathematician .The only slight difference is that it was expressed through Chinese figures.