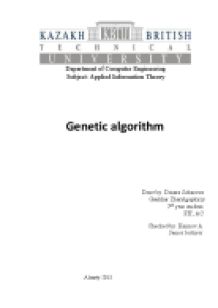 Genetic algorithms are a part of evolutionary computing, which is a rapidly growing area of artificial intelligence.

Idea of evolutionary computing was introduced in the 1960s by I. Rechenberg in his work "Evolution strategies" (Evolutionsstrategie in original). His idea was then developed by other researchers. Genetic Algorithms (GAs) were invented by John Holland and developed by him and his students and colleagues. This lead to Holland's book "Adaption in Natural and Artificial Systems" published in 1975.

In 1992 John Koza has used genetic algorithm to evolve programs to perform certain tasks. He called his method "genetic programming" (GP). LISP programs were used, because programs in this language can express in the form of a "parse tree", which is the object the GA works on.

After a crossover is performed, mutation take place. This is to prevent falling all solutions in population into a local optimum of solved problem. Mutation changes randomly the new offspring. For binary encoding we can switch a few randomly chosen bits from 1 to 0 or from 0 to 1. Mutation can then be following:

There are two basic parameters of GA - crossover probability and mutation probability.

Mutation probability says how often will be parts of chromosome mutated. If there is no mutation, offspring is taken after crossover (or copy) without any change. If mutation is performed, part of chromosome is changed. If mutation probability is100%, whole chromosome is changed, if it is 0%, nothing is changed.
Mutation is made to prevent falling GA into local extreme, but it should not occur very often, because then GA will in fact change to
random search.

There are also some other parameters of GA. One also important parameter is population size.

Population sizesays how many chromosomes are in population (in one generation). If there are too few chromosomes, GA have a few possibilities to perform crossover and only a small part of search space is explored. On the other hand, if there are too many chromosomes, GA slows down. Research shows that after some limit (which depends mainly on encoding and the problem) it is not useful to increase population size, because it does not make solving the problem faster.

Parents are selected according to their fitness. The better the chromosomes are, the more chances to be selected they have. Imagine a roulette wheel where are placed all chromosomes in the population, every has its place big accordingly to its fitness function, like on the following picture.

Then a marble is thrown there and selects the chromosome. Chromosome with bigger fitness will be selected more times.

This can be simulated by following algorithm.

Of course, step 1 is performed only once for each population.

The previous selection will have problems when the fitnesses differs very much. For example, if the best chromosome fitness is 90% of all the roulette wheel then the other chromosomes will have very few chances to be selected.

You can see in following picture, how the situation changes after changing fitness to order number.

Situation before ranking (graph of fitnesses)

After this all the chromosomes have a chance to be selected. But this method can lead to slower convergence, because the best chromosomes do not differ so much from other ones.

This is not particular method of selecting parents. Main idea of this selection is that big part of chromosomes should survive to next generation.

Idea of elitism has been already introduced. When creating new population by crossover and mutation, we have a big chance, that we will lose the best chromosome.

Elitism is name of method, which first copies the best chromosome (or a few best chromosomes) to new population. The rest is done in classical way. Elitism can very rapidly increase performance of GA, because it prevents losing the best found solution.

Encoding of chromosomes is one of the problems, when you are starting to solve problem with GA. Encoding very depends on the problem.

In this chapter will be introduced some encodings, which have been already used with some success.

Binary encoding is the most common, mainly because first works about GA used this type of encoding.

Crossover and mutation are two basic operators of GA. Performance of GA very depends on them. Type and implementation of operators depends on encoding and also on a problem.

There are many ways how to do crossover and mutation. In this chapter are only some examples and suggestions how to do it for several encoding.

Single point crossover - one crossover point is selected, till this point the permutation is copied from the first parent, then the second parent is scanned and if the number is not yet in the offspring it is added
Note: there are more ways how to produce the rest after crossover point

All crossovers from binary encoding can be used