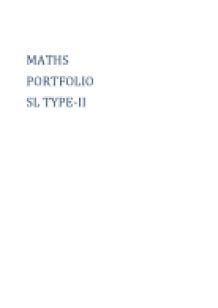 In this task, you will investigate different functions that best model the population of China from 1950 to 1995.

Aim: In this task, you will investigate different functions that best model the population of China from 1950 to 1995.

Now, scatter plot the above data: 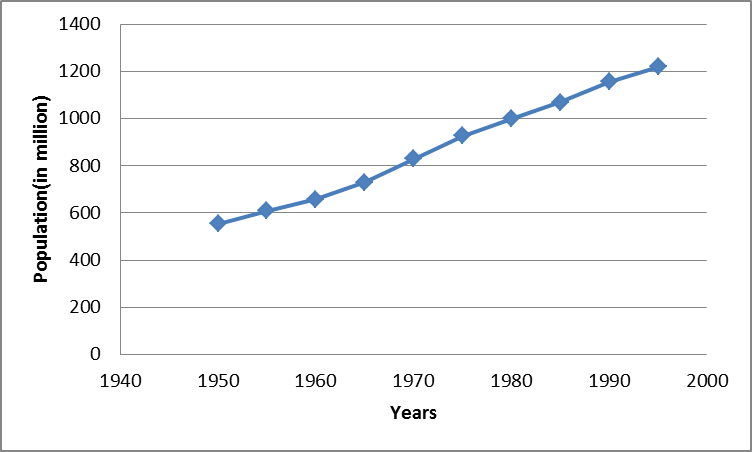 Now we can observe that population data can be checked for fitness in the logistic function.

The logistic equation is a simple model of population growth in conditions where there are limited resources. When the population is low it grows in an approximately exponential way. Then, as the effects of limited resources become important, the growth slows, and approaches a limiting value, the equilibrium population or carrying capacity.

The logistic growth model is

Here x is the population, which is a function of time t. K is the equilibrium population, and r is the growth rate.

Note that in the limit K→∞, we get the simpler model:

The logistic model can be normalised by rescaling the units of population and time. Define y := x/K and s := rt. The result is

The formula for the logistic function,

involves three parameters A, B, C. (Compare with the case of a quadratic function y = ax2+bx+c which also has three parameters.) We will now investigate the meaning of these parameters. First we will assume that the parameters represent positive constants. As the input x grows in size, the term –Bx that appears in the exponent in the denominator of the formula becomes a larger and larger negative value. As a result, the term e–Bx becomes smaller and smaller.

To identify the exact meaning of the parameter A, set x = 0 in the formula; we find that

Clearing the denominator gives the equation (1 + A) y(0) = C. One way to interpret this last equation is to say that the limiting value C is 1 + A times larger than the initial output y(0) An equivalent interpretation is that A is the number of times that the initial population must grow to reach C .The parameter B is much harder to interpret exactly. We will be content to simply mention that if B is positive, the logistic function will always increase, while if B is negative, the function will always decrease.

A look at a scatterplot of these data makes clear that a logistic function provides a good model. It also appears that data seems to be quickly approaching its limiting value. It makes sense for us to estimate this limiting value as C = 1250.

The behaviour of the logistic equation is more complex than that of the simple harmonic oscillator. The type of orbit depends on the growth rate parameter, but in a manner that does not lend itself to "less than", "greater than", "equal to" statements. The best way to visualize the behaviour of the orbits as a function of the growth rate is with a bifurcation diagram. Pick a convenient seed value, generate a large number of iterations, discard the first few and plot the rest as a function of the growth factor.