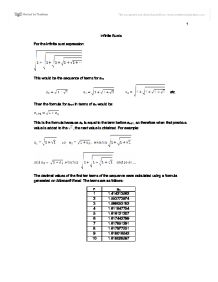 Infinite Surds Investigation. This graph illustrates the same relationship as was demonstrated in the infinite surd of 1. The largest jump between values occurs between 1 and 2.

This would be the sequence of terms for an:

Then the formula for an+1 in terms of an would be:

This is the formula because an is equal to the term before an+1, so therefore when that previous value is added to the

, the next value is obtained. For example:

The decimal values of the first ten terms of the sequence were calculated using a formula generated on Microsoft Excel. The terms are as follows:

The graph for these values: 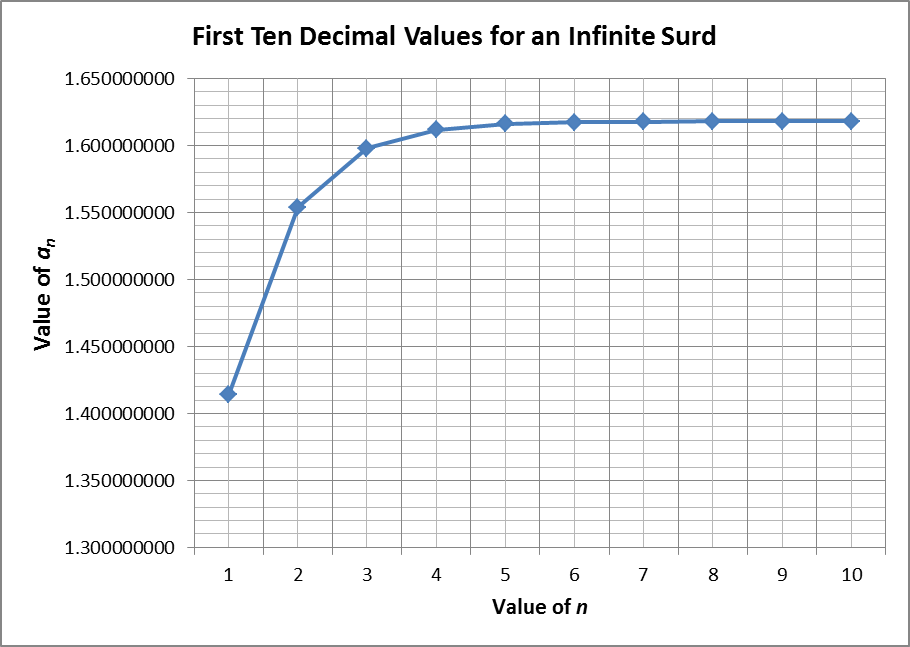 Illustrates that as the value of n gets larger, the values of an start to have lesser and lesser difference. The biggest jump in the graph occurs between 1 and 2, and the curve begins to level out once n equals five. This graph suggests that the value of an – an+1 will begin to approach zero as n gets very large because there is less of a difference between the values of an. This shows the relationship to the gradient of the curve and how it starts to approaches zero.  This can be illustrated arithmetically as well as graphically:

The graph for these values is: 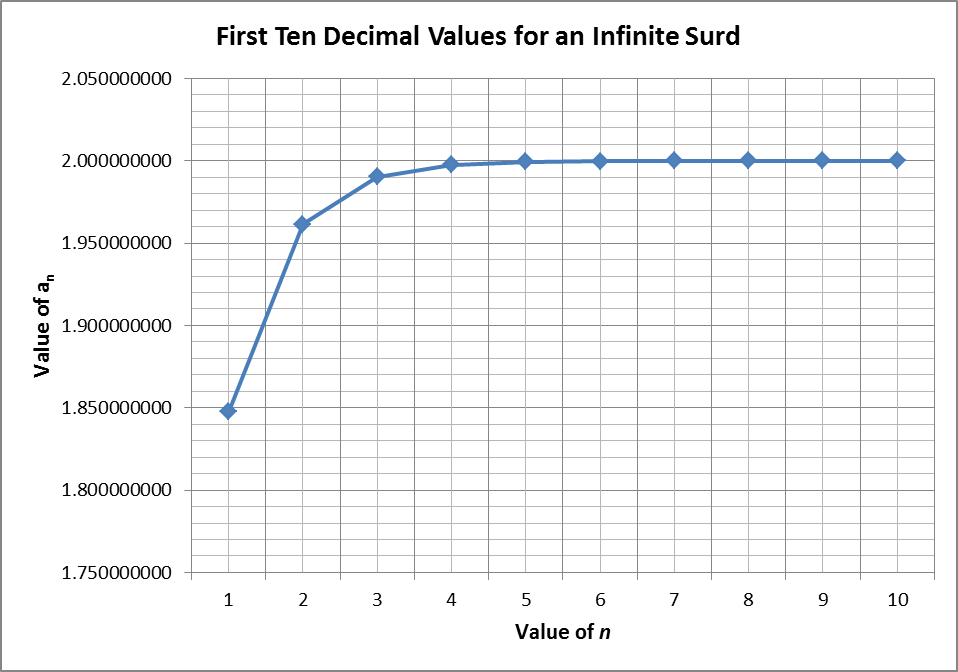 It is interesting that the curves of both graphs look very similar. This graph illustrates the same relationship as was demonstrated in the infinite surd of 1. The largest jump between values occurs between 1 and 2. The gradient of the curve starts to approach zero as the value of n becomes larger as shown by value of an – an+1. This value can also be shown arithmetically:

The exact value of this infinite surd could be determined using the same idea as Part 1:

The surd is canceled once the whole equation is squared and this is left:

This equation can be solved by factoring:

So the exact value of this infinite surd is: 2

Where the first term is:

The exact value of this general infinite surd can be found using the same idea as previously used:

This is not an integer and therefore does not fit the requirement for the general statement.

Scope and/or Limitations of General Statement:

It would be difficult to test every single number, and that is a limitation in my theory that k=n(n-1). The answer to the infinite surd of one,

represents the only positive solution for the golden ratio. The golden ratio is an irrational number that goes on and on without any pattern in the numbers. This number appears many times in art, geometry, architecture, and other areas.

Other limitations for the general statement are that ……………

I arrived at my general statement by deciding what values of k would make the square root a perfect square, since a perfect square would give you an integer. First, I made a simple formula on Excel that would calculate the value of the expression,

If k equaled any integer, such as 1, 2, 3, 4, 5, 6, 7, 8, 9, 10...; I did this for every integer until 200. By using the technology in Excel, this task was fairly simple. After this, I noted all the values of k that would make the whole expression an integer, and then I made a table of these values. Using this strategy, I formulated my general statement based on the pattern that I noticed in the values of k.