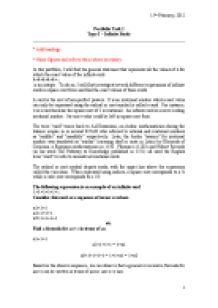 * Name figures and refer to them where necessary

In this portfolio, I will find the general statement that represents all the values of k for which the exact value of the infinite surd

is an integer.  To do so, I will first investigate several different expressions of infinite surds in square root form and find the exact values of these surds.

The term “surd” traces back to Al-Khwarizmi, an Arabic mathematician during the Islamic empire in or around 825AD who referred to rational and irrational numbers as “audible” and “inaudible” respectively.  Later, the Arabic “asamm” for irrational number was translated as “surdus” (meaning deaf or mute in Latin) by Gherardo of Cremona, a European mathematician in 1150.  Fibonacci (1202)

increases at a decreasing extent.  That is, each time it increases less than before.  The scatter plot seems to have a horizontal asymptote at y=1.618.  The value of an approaches approximately 1.618 (i.e. an≈1.618) but never reach it.

In other words, as n gets larger, the difference with the successive term (also shown in the figures in the “an+1 - an” column of the table) is gradually decreasing and almost reaches 0.

What does this suggest about the value of an- an+1 as n gets very large?

The above observation suggests that as n gets very large and at a certain large enough point, an will cease to increase and remain stable at a value.  The graph will then follow a straight horizontal line.

In other words, as n approaches infinity, the value of an- an+1 approaches 0.  To express in numerical notations, as n→∞, an=an+1.

Use your results to find the exact value for this infinite surd.

The above analysis so far only shows that an≈1.618.  To find the exact infinite value for this sequence, we need to rearrange the recursive formula an+1=1+an.

Find the general statement that represents all the values of k for which the expression is an integer.

Explain how you arrived at your general statement.

The general statement that represents all the values of k would be:

For the expression 1+1+4k2 to be an integer, there are two conditions.

(2) 1+1+4k must be an even number so that after it is further divided by 2, the final result would be an integer.

Test the validity of your general statement using other values of k.

To prove my general statement is valid, we consider 3 cases.

When only Condition (1) is met,

Discuss the scope and / or limitations of your general statement.