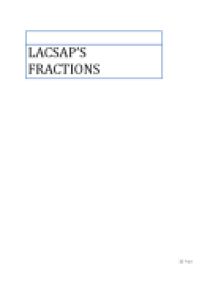 LACSAP FRACTIONS - I will begin my investigation by continuing the pattern and finding the numerator of the sixth row.

The purpose of my investigation will be to achieve the general statement for a set of numbers that are presented in a symmetrical pattern.

Looking at the pattern below I will begin my investigation by continuing the pattern and finding the numerator of the sixth row. 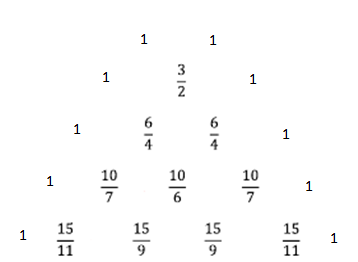 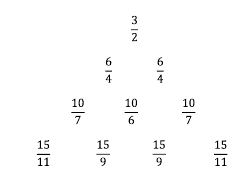 Therefore I can conclude that the numerator value for the sixth row will be 21.

Again, since there is no fourth element in rows 1,2 and 3 the difference is not applicable. The differecen this time increases by 4 each time and therefore the difference can be stated as 4(n-4).

For this table rows 1,2,3 and four aren’t applicable because there is no fifth element in those rows. The difference this time increases by 5 each time and therefore the difference can be stated as 5(n-5).

Looking at these tables it becomes obvious that the difference between numerator and denominator increases by the r value. Thus I was able to conclude that the general statement much be something along the lines of 0.5n2 + 0.5n – (difference of Numerator and Denominator). Looking at the data I have gathered above I have come to the conclusion that the general statement must be…..

Now that I have come up with my general statement I will test its validity to make sure it works.

Now that I have come up with the general statement I will test its validity to make sure my statement is valid.

Test validity for when En(r) =

Test validity for when  n = 10 and r = 6 however since I have not extended my pattern into the 10th row I will extend my pattern in the 10th row for the 6th element in order to figure what the En(r) value will be. Then I will use my general statement to test its validity.

After testing the validity of my general statement I have come to the conclusion that my statement is valid for all the number I have tested. However there are some limitations to my general statement, regarding the variable I am using. Firstly n must be a whole number because there needs to be an entire row to complete the pattern, you cannot have part of the row, n must also be greater than zero because there can’t be a negative row in the pattern. The same limitations apply to r, which must be greater than zero and a whole number because there cannot be a negative or partial element in the pattern.