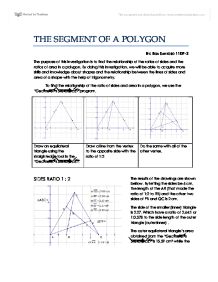 The segment of a polygon

THE SEGMENT OF A POLYGON

To find the relationship of the ratio of sides and area in a polygon, we use the “Geometer’s Sketchpad” program.

From the Pythagoras theory (tan= 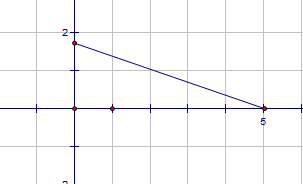 from this point, we know that sinΘ =

To find AT we use the sine rule.

So, the ratio (after crossing the

is 4:28 or simplified to be 1:7. The calculation of the “Geometer’s sketchpad” and the formula is true.

Of course, checking the other ratios (of the triangle shaped polygons) are a bit different from the one calculated above. Every one of the triangle have only 3 parts overlaying another part. When it is 1:2, the portion of the section is

, which makes the whole part of the triangle covered if not minus the overlaying parts. In other ratios though, an additional calculation is needed. 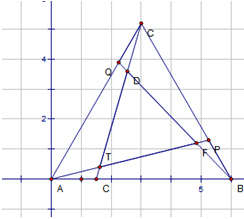 Exactly the same as the 1:2, the area of ∆CAB can be determined as below

There will be an additional

to get the area of the smaller triangle.

Therefore, to find the area of the smaller triangle, we are able to construct a formula of

So from the predictions of relationship above, I made this table below to summarize my findings and my predictions.

The ratio of the outer shape addition should increase since the inner shape also increases (the square of the next number). If we look at the outer ratio of the triangle and square, the pattern value increases every time, from 4 (17-13) for the 1:2, 5 (22-17) for 1:3. That is why I predict the pattern of the other polygons would be similar to that. Even though I cannot verify whether the patterns of the other kinds of polygon are exactly like my prediction, I know that the segments were constructed in a similar manner for other regular polygons since to find the triangles inside the shapes; we basically use the same formula of trigonometry (sine rule, etc).