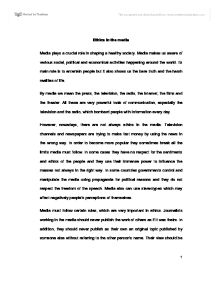 Ethics in the Media

Ethics in the media Media plays a crucial role in shaping a healthy society. Media makes us aware of various social, political and economical activities happening around the world. Its main role is to entertain people but it also shows us the bare truth and the harsh realities of life. By media we mean the press, the television, the radio, the internet, the films and the theater. All these are very powerful tools of communication, especially the television and the radio, which bombard people with information every day. However, nowadays, there are not always ethics in the media. ...read more.

Media also can use stereotypes which may affect negatively people's perceptions of themselves. Media must follow certain rules, which are very important in ethics. Journalists working in the media should never publish the work of others as if it was theirs. In addition, they should never publish as their own an original topic published by someone else without referring to the other person's name. Their view should be objective, and they should not try to pass their view to other people unless they are asked to express their opinion. Moreover, they should always avoid misleading other people, by giving wrong information or shocking people by revealing sensitive information. ...read more.