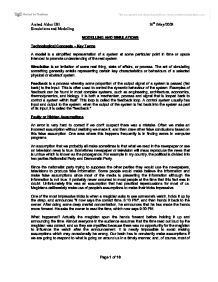 MODELLING AND SIMULATIONS Technological Concepts - Key Terms A model is a simplified representation of a system at some particular point in time or space intended to promote understanding of the real system. Simulation is an imitation of some real thing, state of affairs, or process. The act of simulating something generally entails representing certain key characteristics or behaviours of a selected physical or abstract system. Feedback is a process whereby some proportion of the output signal of a system is passed (fed back) to the input. This is often used to control the dynamic behaviour of the system. Examples of feedback can be found in most complex systems, such as engineering, architecture, economics, thermodynamics, and biology. It is both a mechanism, process and signal that is looped back to control a system within itself. This loop is called the feedback loop. A control system usually has input and output to the system; when the output of the system is fed back into the system as part of its input, it is called the "feedback." Faulty or Hidden Assumptions An error is very hard to correct if we don't suspect there was a mistake. Often we make an incorrect assumption without realizing we made it, and then draw other false conclusions based on this false assumption. One area where this happens frequently is in finding errors in computer programs. An assumption that we probably all make sometimes is that what we read in the newspaper or see on television news is true. Sometimes newspaper or television will mass reproduce the news that is untrue which is known as the propaganda. For example in my country, the political is divided into two parties Nationalist Party and Democratic Party. Since the nationalist party trying to suppress the other parties they would use the newspapers, televisions to produce fake information. Some people would make believe the information and make false assumptions since most of the media is presenting the information although the information is not true. ...read more.

A weather forecast at 8:00 in the morning may not be reliable at 3:00 that same afternoon. A weather forecast in one city is not the same for neighboring regions. For this reason, local weather people never say what will happen, only what is likely to happen in the local area. It was during the 1980's and 1990's, the accuracy of short-range (1-3 days) and medium-range (4-7 days) weather forecasts improved significantly. Weather predictions issued for periods longer than seven days are known as long-range outlooks. Advances in computer power and technology have now make it possible for the National Weather Service to produce meteorological forecast charts of possible future weather conditions out to 16 days. For example, the Global Forecast System (GFS) is a computer model that currently predicts general weather patterns and conditions out to 16 days. According to R. Clayton Brough, ABC4 (KTVX) Climatologist, "When such [long-range] computer models are used in conjunction with known climatological patterns and probabilities they can generate accuracy levels of 55% to 65% relative to general weather patterns--such as drier or wetter or cooler or warmer than normal conditions--over an expected area and period of time." The weather is really unpredictable a hundred percent so a lot of weather reporters are careful in their use of language during broadcasting the weather. They try to present it so that it sounds that it will be as they predict it will most likely turn out to be but also that they will not be taken responsible for incorrectly predicting the weather. Also the presenting of the weather on screen as seen on computer models must make sense to viewers as the weather presenter talks of it for it also provides a kind of psychological approval to have a visual aid of some sort. Wrong predictions (which is becoming lesser these days) can be attacked for it can affect a lot of daily life and activities so weather but good prediction means a lot to people who use it to their advantage to plan or do things now that they have a sort of guarantee of a good weather. ...read more.

For example, in Duke University an adult mannequin is used as a simulation which is programmed to respond appropriately to the environment and basically it can act like a human being. These mannequins are computer controlled and one of the reasons this is being done is so that doctors can understand human beings better. However, this is where the ethical issue comes in. Can you really and sincerely trust this technology with a human being's life? Let's say a very sick patient comes to the hospital and it just so happens that the doctor had programmed the mannequin to have the same sickness this human being has. So the doctor just gives the new patient medicines that he gave the mannequin since the medicines worked on him. Is this really ethical? How can a doctor play with a patient's life like that? That scenario is based in a hospital. A lot of people are using computer models today and basing their products on these models. For example, engineers use simulations when testing new cars and then they sell it to the consumers because they are sure that the car is perfect since it worked perfectly on a computer. Is that really ethical? A car vendor just wants to make money so he uses a simulation (just for the sake of it) and makes sure that he can prove to the court (in case somebody sues) that he checked the car's safety on a computer. I don't think it is the right thing to give a person's life into a computer's hands. In order to ensure safety, real human beings must be tested instead of a computer simulation. One might argue that real human beings might be affected. Well how about we try someone who's about to die or has already died? That has more credibility to it than testing the model on a computer! Sources: > http://www.systems-thinking.org/modsim/modsim.htm > http://en.wikipedia.org/wiki/Simulation > http://en.wikipedia.org/wiki/Feedback > http://itgssyllabus.blogspot.com/2007/12/225-modelling-and-simulations.html ?? ?? ?? ?? Arshad Akber IB1 16th /May/2008 Simulations and Modelling Page 1 of 10 ...read more.