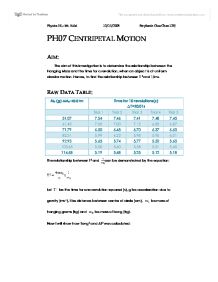 The relationship between T2 and

can be demonstrated by the equation:

be the time for one revolution squared (s), g be acceleration due to gravity (ms-1), l be distance between centre of circle (cm),

Then we have to find Tavg2 and to do that we find Tavg first, and the average is divided by 50 because the time is in 10 revolutions and I need find Tavg for 1 revolution:

Then lastly to calculate ΔT2:

hg, hence T= mhg-f. Then we derive the equation with friction taken into account:

Secondly the mass of the string will affect the experiment because it adds on more mass to the system.

For friction that occurs between string and tube we should add some lubricants and for the mass of the string that effects the system we should use a thinner and lighter string to minimize the error.