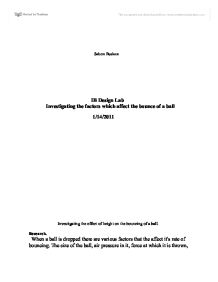 Investigating the factors which affect the bounce of a ball

Investigating the effect of height on the bouncing of a ball.

When a ball is dropped there are various factors that the affect it's rate of bouncing. The size of the ball, air pressure in it, force at which it is thrown, temperature, material of the ball, surface at which it is thrown ,drop height etc. In this experiment I will only consider height and it's effect when the ball is dropped. The amount of time needed for a ball to come to complete rest when it is dropped from various height will be analyzed. I assume that that the higher the distance at which the ball is dropped to the surface the longer it will take to stop bouncing or come to a complete stop.

Use the same process with varying heights ( 10, 20 , 30...) and make sure that for each height there are three separate readings.

According to the graph the the increased height do result longer time that made the ball come to complete stop. It was because of the increased  energy each time the ball hit the surface and bounced back.

I think the procedure mentioned is capable of bringing out an accurate result. There was not any anomalies present in the graph. The procedure/method  also quite easy to carry out.

However I did not use metal clamps to hold the ruler straight, instead I taped it against the wall. I could not put all three lines in the same graph too. Which shows with the better use of technology the accuracy rate could have gotten higher.

Better use of the Graphical analysis software , I could not get three line in a single graph

The temperature was not exactly constant

For better accuracy a sensor or a video camera could have been used to record the number of bounces.