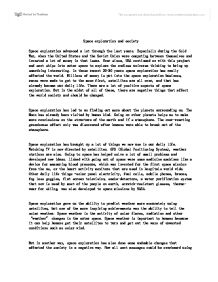 Space exploration advanced a lot through the last years. Especially during the Cold War, when the United States and the Soviet Union were competing between themselves and invested a lot of money in that issue. Ever sinse, USA continued on with this project and sent ships into outer space to explore the endless universe thinking to bring up something interesting. In these recent 20-30 years space exploration has really affected the world. Billions of money is put into the space exploration business, races were made to get to the moon first, satellites are all over, and that has already become our daily life. There are a lot of positive aspects of space exploration. But in the midst of all of these, there are negative things that affect the world society and should be changed.

Space exploration has led to us finding out more about the planets surrounding us. The Moon has already been visited by human kind. Going on other planets helps us to make more conclusions on the structure of the earth and it's atmosphere.

But in another way, space exploration has also done some undoable changes that affected the society in a negative way. Now all sent messages could be overheard using satellites, which cause a loss of privacy. Deaths have occurred as a result of activity outside the earth's atmosphere. Proliferation of terrorist mechanisms aimed to kill people has developed. Now mechanisms are developed that can use energy to shoot from an orbit and kill hundreds of people. Terrorism in another way – GPS (Global Positioning System) can be used for disruption, as well as targeting. Some cases include crashing airplanes into skyscrapers.

The most visible problem with space exploration is money. Even small failures cost millions of dollars, which is sad because that same money could be used to help make earth a better place instead of trying to get individuals outside earth. A lot of famous people think that for that same money, you could help the poor, improve education, health care and other life conditions in less developed countries.

In conclusion the best thing to say is that following the fact that space exploration does more benefits then disadvantages to the human society, space exploration should continue to try and find more resources about the outer space. The society is gaining more knowledge which is good, and is able to use new services which help humans live. New services make more connection and communication available. And that is what society is about – communication.

The Areas of interaction that I personally think this issue is most fitting to be linked to are:

-“ The Impact of Space