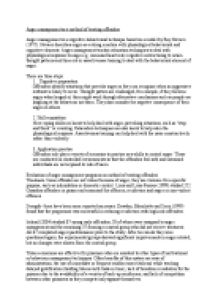 Anger management as a method of treating offenders

﻿Anger management as a method of treating offenders Anger management is a cognitive-behavioural technique based on a model by Ray Novaco (1975). Novaco describes anger as a strong emotion with physiological behavioural and cognitive elements. Anger management teaches relaxation techniques to deal with physiological response to anger e.g. increased heart rate) cognitive restructuring to retain thought patterns and time out or assertiveness training to deal with the behavioural element of anger. There are three steps: 1. Cognitive preparation Offenders identify situations that provoke anger so they can recognise when an aggressive outburst is likely to occur. Thought pattern are challenged, for example, if they become angry when lauged at, they might work through alternative conclusions such as people are laughing at the behaviour not them. ...read more.

These are conducted in controlled environments so that the offenders feel safe and untrained individuals are not exposed to risk of harm. Evaluation of anger management programs as method of treating offenders Weakness- Some offender are not violent because of anger, they use violence for a specific purpose, such as intimidation or domestic control. Loza and Loza-Fanous (1999) studied 252 Canadian offenders in prison and examined the offences, recidivism and anger or non-violent offences. Strength- there have been some reported successes. Dowden, Blanchette and Serin (1999) found that the programme was successful in reducing recidivism with high-risk offenders. Ireland (2004) studied 87 young male offenders, 50 of whom were assigned to anger management and the remaining 37 forming a control group who did not receive treatment. ...read more.

Ultimately, token economies have been found to be an effective method of behaviour management across various settings. This analysis has compiled evidence of effectiveness across school and community settings; however, token- reinforcement systems have seen remarkably diverse applications in prisons, military organizations, and psychiatric hospitals. In order to effectively implement a token economy, it is important to fully understand the principles of behaviour, the variety of token systems, and how to manipulate the conditions of the token economy in order to best serve the needs of female offenders. Laboratory research on token systems dates back to pioneering studies by Wolfe (1936) and Cowles (1937) with chimpanzees as experimental subjects. Klimas and McLaughlin (2007) studied a female kindergarten student with a developmental disability who had difficulty completing assignments in the classroom. ...read more.