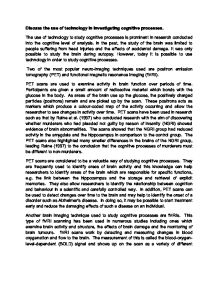 Discuss the use of technology in investigating cognitive processes

Discuss the use of technology in investigating cognitive processes. The use of technology to study cognitive processes is prominent in research conducted into the cognitive level of analysis. In the past, the study of the brain was limited to people suffering from head injuries and the effects of accidental damage. It was only possible to study the brain during autopsy. However, today it is possible to use technology in order to study cognitive processes. Two of the most popular neuro-imaging techniques used are positron emission tomography (PET) and functional magnetic resonance imaging (fMRI). PET scans are used to examine activity in brain function over periods of time. Participants are given a small amount of radioactive material which bonds with the glucose in the body. As areas of the brain use up the glucose, the positively charged particles (positrons) remain and are picked up by the scan. These positrons acts as markers which produce a colour-coded map of the activity occurring and allow the researcher to see changes in activity over time. ...read more.

In addition, PET scans can be used to detect changes over time to the brain and may help to identify the onset of a disorder such as Alzheimer's disease. In doing so, it may be possible to start treatment early and reduce the damaging effects of such a disease on an individual. Another brain imaging technique used to study cognitive processes are fMRIs. This type of fMRI scanning has been used in numerous studies including ones which examine brain activity and structure, the effects of brain damage and the monitoring of brain tumours. fMRI scans work by detecting and measuring changes in blood oxygenation and flow to the brain. The measurement of this is called the blood-oxygen-level-dependent (BOLD) signal and shows up on the scan as a variety of different colours. The brighter the colours (e.g red changing to yellow), the more activity can be said to be occurring in that particular part of the brain. FMRIs have been used in research such as that carried out by Kozel et al. ...read more.

Whilst both PET and fMRI scans allow us to identify activity in areas of the brain, researchers need to be careful not to jump to the conclusion that an area of activity is directly linked to a cognitive process or behaviour. For example, the amygdala has been identified as being responsible for memory but has also been linked with emotional arousal such as fear. As parts of the brain are interconnected, it would not be considered reliable for a researcher to jump to the conclusion that two factors are undeniably linked without conducting further research. Another criticism of using scans to investigate cognitive processes is that the technology is not yet sophisticated enough to detect very subtle brain activity. Whilst fMRI scans provide images at a higher resolution, they are currently unable to detect small levels of activity which may add to our knowledge of cognitive processes. As technology develops, a wider picture of how the brain works will be developed however our current knowledge is still quite limited. ...read more.