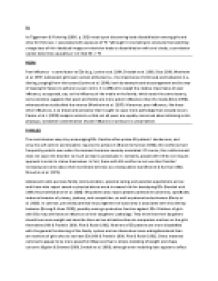 ï»¿TV As Tiggemann & Pickering (1996, p. 202) noted upon discovering body dissatisfaction among girls and drive for thinness -> associated with exposure of TV “although it is tempting to conclude that watching a large dose of thin idealized images on television leads to dissatisfaction with one’s body, a correlation cannot determine causality or is it that ED -> TV ________________ PEERS Peer inï¬uence - a contributor to EDs (e.g., Levine et al. 1994, Shisslak et al. 1998, Stice 1998, Wertheim et al. 1997. Adolescent girls learn certain attitudes (i.e., the importance of slimness) and behaviors (i.e., dieting, purging) from their peers (Levine et al. 1994), both by example and encouragement and by way of teasing for failure to adhere to peer norms. ...read more.

Of course, this reinforcement does not cause the disorder so much as help to perpetuate it. Certainly, people with AN do not require approval in order to starve themselves. In fact, those with AN as often as not use their families’ increasing concerns about their inordinate slimness as a manipulative tool (Branch & Eurman 1980, Minuchin et al. 1978). Adolescents who perceive family communication, parental caring, and parental expectations as low and those who report sexual or physical abuse are at increased risk for developing EDs (Haudek et al. 1999, Neumark-Sztainer et al. 2000). BN patients also report greater parental intrusiveness, speciï¬cally maternal invasion of privacy, jealousy, and competition, as well as paternal seductiveness (Rorty et al. ...read more.

1999), although even modeling does appear to affect elementary schoolchildren’s weight and shape-related attitudes and behaviors (Smolak et al. 1999). Mothers’ critical comments prospectively predicted ED outcome for their daughters (Vanfurth et al. 1996). If we were to conclude that negative family inï¬uences were in fact responsible for the development of EDs, we would still need to ask exactly how a dysfunctional family induces EDs. Below, we consider the possibility that problems of identity and/or control are central to EDs, with the individual attempting to resolve these problems by investing emotionally and behaviorally in the pursuit of slimness. Steiger et al. (1996) conclude that families (including so-called normal families as well) may transmit eating concerns, but such transmission may not be sufï¬cient for the emergence of an ED, which requires “some additional vulnerability factor”. ________________ ...read more.