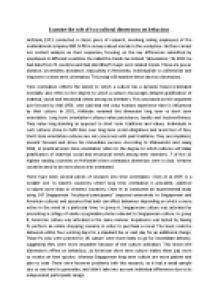 Examine the role of two cultural dimensions on behaviour

﻿Examine the role of two cultural dimensions on behaviour Hofstede 1973 conducted a classic piece of research, involving asking employees of the multinational company IBM to fill in surveys about morale in the workplace. He then carried out content analysis on their responses, focusing on the key differences submitted by employees in different countries. He called the trends he noticed ?dimensions.? By 2001 he had data from 72 countries and had identified 5 major work related trends. These are power distance, uncertainty avoidance, masculinity vs femininity, individualism vs collectivism and long term vs short term orientation. This essay will examine these last two dimensions. Time orientation reflects the extent to which a culture has a dynamic future-orientated mentality and refers to the degree to which a culture encourages delayed gratification of material, social and emotional needs among its members. This was based on the argument put forward by Hall 1959, who said that the ways humans experience time is influenced by their culture. In 2001, Hofstede renamed this dimension long term vs short term orientation. Long term orientation cultures value persistence, loyalty and trustworthiness. They value long-standing as opposed to short term traditions and values. Individuals in such cultures strive to fulfil their own long-term social obligations and avoid loss of face. Short term orientation cultures are not concerned with past traditions. ...read more.

It was also never published so it could be unreliable. Ayoun and Moreo 2009 surveyed hotel managers in the USA and Thailand, and found that Thai managers placed stronger emphasis on long term strategic plans and a stronger reliance on long term-evaluation of strategy. This studies? sample size wasn?t generalizable as it looked at hotel managers, only had correlational data (can?t infer cause and effect) and didn?t control the variables. It did however have good ecological validity as it was a natural experiment. Levine and Norenzayan 1999 related time orientation to everyday behaviours. They measured how fast people walked in downtown areas of major cities, the speed of a visit to the post office and the accuracy of clocks in 31 countries. They found that life pace was fastest in countries like Switzerland, Ireland and Germany, and slowest in Mexico, Indonesia, Brazil and Syria. This research showed that in short term cultures people are in a rush to get things done, whereas in long term cultures people are more relaxed about timing. This study is reliable as it was a natural study (ecological validity), and had a good sample size. However, it must be asked if they had consent as they were observing random people. Overall, all the studies examined have been reliable as they were all finding the same results using different methods. ...read more.

Bond and Smith 1996 did a meta-analysis of 133 conformity studies all using the Asch paradigm. They took studies from 17 countries (decent sample size) and found more conformity in collectivist countries (Fiji, Hong Kong, Brazil) than in individualist countries (USA, UK, France). This shows that members of collectivist countries value conformity because it promotes group relationships and reduces conflicts. Therefore agreeing with others in collectivist societies is more likely to be viewed as a sing of sensitivity than of submission so somebody else?s views, which is how it may be perceived in individualist countries. Thus cultural dimensions may have an influence on behaviour as they change people?s view of the behaviour (in this case conformity). The number of studies Bond and Smith looked at for each country varied wildly and is therefore unreliable. But, this doesn?t mean that members of collectivist societies always conform to group views. Earley 1993 found that conformity levels depend on the exact nature of the group. Collectivist cultures may be more likely to conform to members of a group they are tied to. Williams and Sogon 1984 found significantly higher levels of conformity among the Japanese groups who already knew one another than among groups who did not. As the studies have shown, cultural dimensions can effect behaviour e.g. conformity and speed of life. The studies taken all together build a reliable picture and further emphasise the differences between the cultures of the world. ...read more.