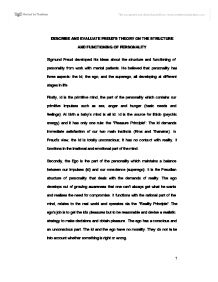 Freud's Theory on Structure and Functioning of Personality

DESCRIBE AND EVALUATE FREUD'S THEORY ON THE STRUCTURE AND FUNCTIONING OF PERSONALITY Sigmund Freud developed his ideas about the structure and functioning of personality from work with mental patients. He believed that personality has three aspects: the id, the ego, and the superego, all developing at different stages in life. Firstly, Id is the primitive mind, the part of the personality which contains our primitive impulses such as sex, anger and hunger (basic needs and feelings). At birth a baby's mind is all id. Id is the source for libido (psychic energy) and it has only one rule: the "Pleasure Principle": The id demands immediate satisfaction of our two main instincts (Eros and Thanatos). In Freud's view, the id is totally unconscious; it has no contact with reality. It functions in the irrational and emotional part of the mind. Secondly, the Ego is the part of the personality which maintains a balance between our impulses (id) and our conscience (superego). It is the Freudian structure of personality that deals with the demands of reality. ...read more.

The balance between id, ego and superego is better than at any other stage. But soon puberty strikes and the genitals once again become a central focus in child's life. Genital stage is the development stage from 12 years to 18 years and older. During this stage the child's energy once again focuses on his genitals and the libido reawakens. If the child has covered the needs of the previous stages it will be capable to develop normal relationships with the opposite sex. The theory described above was based on case studies with Freud's patients. Freud found that during hypnosis his patients were talking about their unconscious memories and desires and revealed their unconscious wishes and phobias. Freud's theory explains a wide range of behaviours, however, various studies focusing on the testing of specific Freudian concepts, such as repression have shown that results could be obtained in other ways as well. In addition, although there is evidence that some characteristics of personality do exist it is not certain whether they are due to fixation. Finally, Freud's theory was criticised as subjective and biased from his own culture and using concepts too vague to be studied objectively. 1 ...read more.