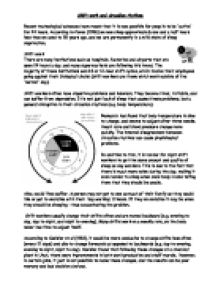 Shift work and circadian rhythms Recent technological advances have meant that it is now possible for people to be 'active' for 24 hours. According to Coren (1996) we now sleep approximately one and a half hours less than we used to 90 years ago, and we are permanently in a mild state of sleep deprivation. Shift work There are many institutions such as hospitals, factories and airports that are open 24 hours a day, and many supermarkets are following this trend. The majority of these institutions work 8 or 12-hour shift cycles, which involve their employees going against their biological clocks (shift workers are those which work outside of the 'normal' day). Shift workers often have digestive problems and insomnia. They become tired, irritable, and can suffer from depression. ...read more.

Shift workers usually change their shifts often and are moved backward (e.g. evening to day, day to night, and night to evening). Many shifts work on a weekly rota, so the body never has time to adjust itself. According to Czeisler et al (1982), it would be more conducive to change shifts less often (every 21 days) and also to change forwards as opposed to backwards (e.g. day to evening, evening to night, night to day). Czeisler found that following these changes at a chemical plant in Utah, there were improvements in both work production and staff morale. However, in certain jobs, it just is not possible to make these changes, and the results can be poor memory and bad decision choices. There are several disasters such as Three Mile Island and Chernobyl which occurred when important decisions had to be made between the hours of 1:30am and 4:30 am. ...read more.

Research shows that females find shift work more difficult, possibly due to family responsibilities and partly because women need more sleep than men do. There are problems with studying shift work, as employees worry that the questions are being asked for the benefit of their bosses whilst employers worry that their working practices are being questioned. They therefore act differently during these studies. In addition, many people find shift work difficult, and therefore do not stay very long, which makes research into bodily rhythms difficult as it entails studying changes over time. Coping strategies can further help the shift worker. On a rapidly changing shift, the worker needs lots of bright sunshine in the day, and should avoid a heavy meal before the evening shift, as this increases sleep. It is also advisable to have a short nap at some time during the night - so that the body recognises that this is also sleep time for when the shift changes back. ...read more.