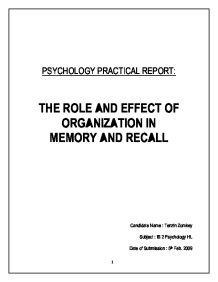 The effect and role of organization on memory and recall

PSYCHOLOGY PRACTICAL REPORT: THE ROLE AND EFFECT OF ORGANIZATION IN MEMORY AND RECALL Candidate Name : Tenzin Zomkey Subject : IB 2 Psychology HL Date of Submission : 5th Feb. 2009 CONTENTS Sr. No Title Page 1 Contents 2 2 Abstract 3 3 Introduction 4 4 Method 5 5 Results 7 6 Discussion 9 7 References 10 9 Appendices 11 ABSTRACT This experiment was carried out in an attempt to test the role or effect of organization in memory and recall. Based on research done by Bower, Clark, Winzenz and Lesgold (1969), (which found that subjects showed better recall if presented with words in an organized format rather than just random), a less extensive reproduction of their work has been conducted in this report. Two different groups of participants were presented with identical sets of twenty two words to learn. For each group, the words were organized differently. One group had words that were organized in the form of an associative hierarchy, whereby one initial word is given at the top, followed by three words that had a strong association to the first and so forth, continuing this trend until a five level hierarchy comprising in total of twenty two words is achieved. Upon asking the participants to recall and write as many words as they could remember; the results showed that there indeed was, as Bower ...read more.

This is because it would be subject to the order effects, whereby if the same participants were to be used for both the conditions, since the list of words are the same for both, the participants might be able to use their knowledge of the organization of the first format (should it be presented first) to aid in their recall of the second (random) one. This is known as an asymmetrical order effect. Hence, an independent samples design has been used. And two trials for each condition were carried out. There were few to negligent presence of extraneous variables as participants were randomly assigned to each of the two groups. * Participants: A total of sixteen participants were used, with eight in each two groups of different conditions. All participants were of the same age ranging from 17-19, currently doing their second year of the International Baccalaureate. They had unanimously accepted to take part in this investigation and none of them had an idea or experience of such an experiment before, all being non-Psychology students. * Materials: A few materials were used in conducting this report. The whiteboard in the classroom was used to present the words in the form of a PowerPoint presentation. There were twenty two words for each condition; these are provided in Appendix 1. ...read more.

but had a very close verbal or meaning association with the ones that they were given; while the other did not depict any such mistakes. So this false recognition of words could potentially flaw their memory and interfere with their recall. The experimental design used for this report was independent sampling. If this experiment were to be repeated, it would still have to be conducted with the same design since repeated measures would produce misleading results as discussed earlier. However, it could be carried out as a matched-pairs design instead of independent groups, where pairs of people would be separately given the two lists of organized and random word formats to remember, but that would be a time consuming process. The number of words given to remember, which was twenty two in this case (compared to Bower et al.'s 112) could also be increased to see whether more words can produce a better result and greater significance between the two groups' recall power. However, the huge quantity of words might perhaps bore the participants and cause them to not pay enough attention. All in all, this experiment produced results that reflected the findings of Bower et al. (1969) and supported the previously stated hypothesis. It could thus be said that organization in information or materials prior to learning has a positive effect on recall and aid our memory. ...read more.