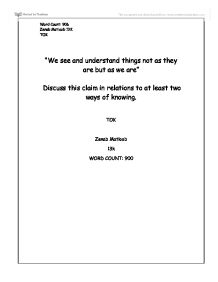 We see and understand things not as they are but as we are Discuss this claim in relations to at least two ways of knowing.

Who was sentenced by the US government when it took over Iraq to be hanged for killing 148 Iraqi Shi'ites in 1982. Most of the world took this as a moment of celebration since such a big leader who was responsible for all the killings and torture of innocent people in Iraq was being hanged, but some people reacted differently. When Saddam Hussein's trial was taking place, some members of public protested against his hanging in the streets of Baghdad, Tikrit and Samara. Even after the hanging of Saddam Hussein rumors started going around that it was an act of cowardness by the Americans. The hanging of Saddam Hussein nearly tore all of Iraq in half, with people that supported Saddam Hussein on one side and the ones that did not on the other. Perception is used to understand or process the information that is sent to our brain through our sensory system. We can only perceive things when the knowledge about that certain matter is already in our minds. ...read more.

Therefore when I got the chance to go to my cousin's Graduation in the Pakistani Air Force I got to see a lot of different emotions. As it was the first time that there was also a group of women graduating from the Pakistani Air Force. A majority of the women reacted the most emotionally by crying with happiness, where as the men did not display the same kind of emotions. This may be since the women saw it as a new step forward for the women of Pakistan and saw it as a progress. Therefore it can be said that there are always different opinion about certain issues, which vary depending on how each individual looks at it. Although all the opinions are "2 sides of the same coin". As all the different opinions are "closely related features of one idea". These opinions may vary depending on our ethics, the way we reason the way we perceive, and how much of our emotions we use. ...read more.