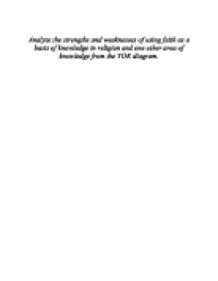 Analyze the strengths and weaknesses of using faith as a basis of knowledge in religion and one other area of knowledge from the TOK diagram.

Analyze the strengths and weaknesses of using faith as a basis of knowledge in religion and one other area of knowledge from the TOK diagram. There are several strengths and weaknesses in using faith as a basis of knowledge in religion and ethics. Faith provides for a strong belief in the doctrines of a religion, based on spiritual belief rather than proof. Nevertheless, with a significant amount of religions in the world, a person's faith can alter due to the religion which is practiced. Referring to ethics, faith contributes to define clear, definitive ways in which one must act in society. This begs the question: To what extent does faith dictate an individual's ethics and morals? To fully grasp the context of faith and its impact in religion, faith must be defined. Faith is vital to the practice and understanding of any religion. Without faith, religions could not exist. Faith aids the spiritual connections in religion, as well as constructing a foundation of beliefs that enable an individual to practice their religion to the fullest extent. Faith is based fully on perception and emotion. Religions are based upon higher beings, and there is no other way to connect to them other than with faith, hence a spiritual connection. Just as Christians worship God, and Hindus worship Brahma, faith provides a way to spiritually connect to such higher beings, which only benefits the worshiper with more knowledge. ...read more.

With such a diverse range of religions, it is impossible to understand and have faith in all. Faith, in this sense, weakens and diminishes one's knowledge of religion and ethics because there is such a wide variety of different practices and spiritual connections. One cannot have knowledge in all aspects of all religions; rather, one must be focused to one religion which emits areas of knowledge due to the immense amount of studying, practicing, and faith. Having faith in one religion makes one stronger in understanding the importance of practicing their choice of religion. With the amount of faith required to support all the religions, one's knowledge would weaken because there is too much information to consume. Due to the amount of different religions in the world, one's perception of ethics would be contaminated because there are a variety of different sources that convey different meanings of ethics. On the contrary, the less information there is to consume, being that of one religion, the more knowledge one gains because one can focus primarily on the religion in which they wish to practice, rather than several different religions. The amount of knowledge present in all the religions in the world is staggering, and one cannot be knowledgeable in all the different faiths. With the broad number of religions, a different faith is present in each religion. ...read more.

Additionally, one may perceive their religion to include ethically right practices, such as practitioners of Satanism and Wicca, yet in reality they do not because they do not contain moral principles that govern a person or group's well being. Perception plays a major role in knowledge, because if one person believes that their practices religion is morally right, they will believe that it is right to follow such practices as a basis for knowledge. Ultimately, using faith as a basis of knowledge has both strengths and weaknesses, and can determine an individual's set of morals. Faith can strengthen religion with ways of believing and spiritual connections, more so by believing that impossible can be possible, but it can also weaken one's knowledge due to the immense amount of religions present in the world. One cannot fully grasp their understanding around so many religions, rather than grasping their understanding around just one. Most importantly, faith strengthens ethics as a basis of knowledge because it illustrates clear examples on how to behave in society. Contrastingly, faith also serves to weaken the area of ethics because some religions practice aspects that are not morally correct. If one's faith includes principles which allow one to be prosperous and respectful to individual's and its society around them, this dictates their ethics and morals to be just, but when one's faith includes principles which do not govern a person or group's right behavior, such as the worshiping of the devil, this dictates a negative correlation between one's ethics and basis for knowledge. ...read more.