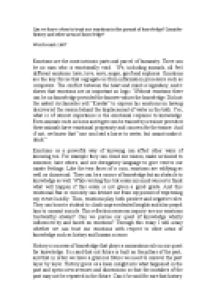 Can we know when to trust our emotions in the pursuit of knowledge? Consider history and other areas of knowledge?

﻿Can we know when to trust our emotions in the pursuit of knowledge? Consider history and other areas of knowledge? Word count: 1607 Emotions are the most intrinsic parts and parcel of humanity. There can be no man who is emotionally void. We, including animals, all feel different emotions: hate, love, envy, anger, grief and euphoria. Emotions are the key forces that segregate us from information processors such as computers. The conflict between the heart and mind is legendary, and it shows that emotions are as important as logic. Without emotions there can be no knowledge provided the knower values the knowledge. Did not the naked Archimedes yell ?Eureka? to express his emotions on having discovered the reason behind the displacement of water in the bath. Yes, what is of utmost importance is the emotional response to knowledge. Even animals such as lions and tigers can be trained by a trainer provided these animals have emotional propensity and concern for the trainer. And if not, we know that ?one can lead a horse to water, but cannot make it drink.? Emotions as a powerful way of knowing can affect other ways of knowing too. For example they can cloud our reason; make us biased to someone; hate others, and use derogatory language to give vent to our innate feelings. ...read more.

Will he be able to do justice with the historical accounts? No. I hope not. In the absence of any concrete evidence as to what really transpired ages ago the historian can take a number of liberties, and distort the facts to his ease and convenience. In the field of history emotions can play a detrimental role as they can lead us astray easily because the claims of the historians may not be based upon evidence. The reason: the historian may follow an emotional approach contrasting the cognitive approach that is based upon information, analysis and knowledge formation. In IGCSE I read the ? Iliad? written by Homer, and I was deeply impressed by the character of the Trojan prince Hector, the tamer of the horses. I was so captivated by his sense of duty and his love for the mother county Troy that I set more value to his character than the real hero Achilles?. Why? Simply, because I felt emotionally more attached to a real warrior than an egotistic warrior who fought only to annihilate others, and embellish his indisputable record as a belligerent combatant. I know I was wrong but I could not help it. ...read more.

They imitate one another without testing their actions on the anvil of reason. What happens when youngsters want to undergo emotional euphoria by taking drugs under peer pressure? Whether they are youngsters or the orthodox parents, during their emotional outbursts they even forget what they are doing. Social emotions make them change colors like the chameleon, and imitate the actions that are followed and practiced by others, howsoever irrational they are. To draw some conclusions from the above discussion I feel that although emotions are very important in our decision making and understanding the things around us, we cannot attribute them with a life force. They are neither the precursor nor the guiding light to our pursuit of knowledge. We cannot trust them wholly when it comes to history and psychology. In fact they cannot stand alone aloof from the other ways of knowing. Despite a number of knowledge claims such as ?"There can be no transforming of darkness into light and of apathy into movement without emotion", we must not forget ?A fool expresses all his emotions, but a wise person controls them.? It is important to control our emotions. If we don?t control them they will control our reason. They are important but their trustworthiness and impeccability in our pursuit of knowledge are questionable whether they are for me or someone else. We must check them lest they should become mistaken judgments. ...read more.