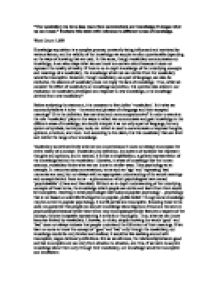 "The vocabulary we have does more than communicate our knowledge; it shapes what we can know." Evaluate this claim with reference to different areas of knowledge. Word Count: 1,699 Knowledge acquisition is a complex process, constantly being influenced and restricted by various factors, and the validity of the knowledge we acquire is often questionable depending on the ways of knowing that are used. In this sense, though vocabulary communicates our knowledge, it can also shape what we can know to a certain extent because it does not represent the totality of reality. If there is no in-depth knowledge of the underlying concepts and meanings of a vocabulary, the knowledge which we can derive from the vocabulary would be incomplete. However, though vocabulary, as a part of language, can also be exclusive, the absence of vocabulary does not imply the lack of knowledge. Thus, while we consider the effect of vocabulary on knowledge acquisition, this question also arises in our evaluation: is vocabulary developed as a response to new knowledge, or is knowledge derived from new vocabulary? Before analyzing the statement, it is necessary to first define 'vocabulary'. Is it what we commonly believe it to be - the words and phrases of a language and their accepted meanings? Or is the definition less restricted and more comprehensive? ...read more.

While people may not be able to express certain things, it does not equal a lack of knowledge. For instance, consider what many people in the Western culture deem as a basic skill in math and in life - the ability to count and understand the concept of 'amount'. We often associate this ability with a vocabulary of numbers with the thinking that having a vocabulary of numbers is equivalent to knowing how to count. But in the language of a small Amazonian community, the Piraha, a vocabulary for numbers does not exist; they use "h�i", "h�i", and "ba�giso" to express quantities meaning "around one", "some", and "many", respectively (Frank, Fedorendko, and Gibson). While they have no numbers, this does not imply that they have no knowledge of the concepts associated with numbers, like the ability to count or the concept of a specific 'amount'. As cognitive neuroscientist Michael Frank and colleagues demonstrated in their 2008 study, when villagers of the Piraha were presented with some number of spools of threads and were told to give the researcher the same number of balloons by lining up the balloon next to the spools one-by-one, they were able to accomplish the task correctly, demonstrating their ability to comprehend the concepts of 'amount' and 'counting' (Frank, Fedorendko, and Gibson). ...read more.

But in most cases, this is not true, and in order to acquire knowledge in the area of history, it would then be necessary to learn the vocabulary then understand the historical knowledge. Thus, this demonstrates that vocabulary can sometimes precede knowledge, in other words, restricting and shaping what we can know. The claim makes an important point in connecting vocabulary to how knowledge can be acquired. However, this assertion is simply too broad and extreme. Vocabulary simply does not always restrict what we can know, or vice versa. The extent to which vocabulary can limit what we can know or whether it precedes knowledge varies from one area of knowledge to another, and thus it would be unfair and unjustified to reach the conclusion on either side of the extremes. Often times, vocabulary is limited in that it fails to represent the entire reality of a concept, since by definition, vocabulary is a system of symbols which communicate thought and opinions, but other times, vocabulary can serve as an entrance to a wealth of knowledge, similar to how our educational system works today. Thus, though there is validity in the claim, the knower must be aware of the limitations of the claim and the fact that knowledge can be acquired without the words or symbols we already have. ...read more.