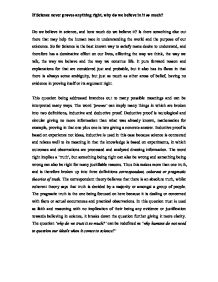 Do we believe in science, and how much do we believe it? Is there something else out there that may help the human race in understanding the world and the purpose of our existence. So far Science is the best known way to satisfy mans desire to understand, and therefore has a dominative effect on our lives, effecting the way we think, the way we talk, the way we behave and the way we construe life. It puts forward reason and explanations for that are considered just and probable, but it also has its flaws in that there is always some ambiguity, but just as much as other areas of belief, having no evidence in proving itself or its argument right. This question being addressed branches out to many possible meanings and can be interpreted many ways. The word 'proves' can imply many things in which are broken into two definitions, inductive and deductive proof. Deductive proof is tautological and circular giving no more information than what was already known, mathematics for example, proving in that one plus one is two giving a concrete answer. ...read more.

The claims that science has made have no sufficient evidence to prove that there are any relations between its beliefs and the true physical form, but it is strongly probable in many areas. For example, in the chemistry side of science, it claims that charcoal or the element C (carbon) sticks to soluble substances and aids in the Filtration, this is when the carbon atoms holds onto to the atom of the soluble substance and can therefore filer it out and returning the natural substance to its original color. Although this action does occur, there is no evidence that the claims that science has made and the actual occurrence or practical have any relation but it is only probable. These claims and scientific discoveries have aid advances in biological studies, through medicine and technologies, using these theories humans have been able to travel through space, split the an atom and clone living organisms. But in amongst it all there is much ambiguity, science in the other hand cannot be trusted, and placing to much faith in it may lead to a fatal mistake. ...read more.

The cons are clearly outweighed in that there is too much dependence in this field of study, such as medicine and technology, relying on information that was only probable but proved to be successful. Without science the human race would not be able to go on, but in order to use this information that science gives us we must trust in it, but at the same time understand that it's a matter of probability and has many uncertain areas. The reason why people believe in science so much is because it is being based on uncertain fact but still mange to be successful. Many chose to place there faith in it, other chose alternative paths, but either way they are always questionable. Not everything can be permanent especially theory because the world is getting older, people are always growing, and science will inevitably change. As the great man himself once said "The most incomprehensible thing about the world is that it is at all comprehensible...As far as the laws of mathematics refer to reality, they are not certain; as far as they are certain, they do not refer to reality" -Albert Einstein- If Science never proves anything right, why do we believe in it so much? ...read more.