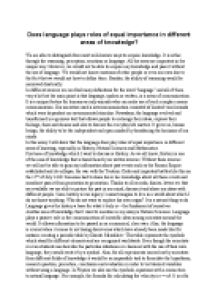 ﻿Does language plays roles of equal importance in different areas of knowledge? We are able to distinguish four most well-known ways to acquire knowledge. It is either through the reasoning, perception, emotions or language. All the areas are important in the unique way. However, we would not be able to acquire any knowledge and pass it without the use of language. We would not know emotions of other people or even our own due to the fact that we would not how to define them. Besides, the ability of reasoning would be narrowed drastically. In different sources we can find many definitions for the word ?language? and all of them vary a bit but the main point is that language, spoken or written, is a mean of communication. It is a unique feature for humans as only animals who can make use of such complex means communication. Our ancestors used a intercommunication consisted of limited vocal sounds which were dependent on environmental stimulus. ...read more.

Another area of knowledge that I want to mention in my essay is Natural Sciences. Language plays a passive role in the communication of scientific ideas among scientists around the world. It allows information to be passed in an economical, clear way. Also, the language is crucial when it comes to not losing discoveries which have already been made like for instance creating a periodic table by Dimitri Mendeleev. This table represents the symbols which stand for different elements and are recognized worldwide. Even though the scientists or even students can describe the particular substance or chemical with the use of their own language, they would write it by a symbol. Also, for all experiments carried out by scientists from different fields of knowledge it would be an impossible task to formulate the hypothesis, research question, procedure, conclusion and evaluation in order to test desired variables without using a language. ...read more.

As we can conclude from the discussion above, the importance of the language varies from one area to another. It also depends on whether we are talking about just one type of language, spoken, written etc. When it comes to History, spoken and written language is absolutely crucial to even just make the existence of this particular area of knowledge. In Natural Science we need both natural language as well as scientific one in order to understand the laws of nature and the world surrounding us. Mathematics gives as a possibility to discover the reality in the extraordinary way by using symbols and numbers when we want to explain mechanism of some actions etc. It also enables us to communicate with people around the world without language boundaries which are so common in different aspects of knowledge. ?The limits of my language stand for the limits of my world?3 this quotation by Ludwig Wittgenstein represents the main function of language perfectly. We need language, no matter in which area of knowledge. It is the essence of our life, the way to express ourselves. ...read more.