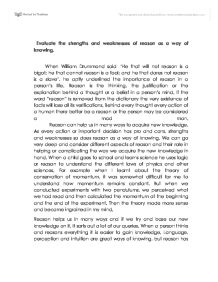 Evaluate the strengths and weaknesses of reason as a way of knowing. When William Drummond said 'He that will not reason is a bigot; he that cannot reason is a fool; and he that dares not reason is a slave', he aptly underlined the importance of reason in a person's life. Reason is the thinking, the justification or the explanation behind a thought or a belief in a person's mind. If the word "reason" is removed from the dictionary the very existence of facts will lose all its verifications. Behind every thought every action of a human there better be a reason or the person may be considered a mad man. Reason can help us in many ways to acquire new knowledge. As every action or important decision has pro and cons, strengths and weaknesses so does reason as a way of knowing. We can go very deep and consider different aspects of reason and their role in helping or complicating the way we acquire the new knowledge in hand. When a child goes to school and learns science he uses logic or reason to understand the different laws of physics and other sciences. ...read more.

Some types of reasoning such as deductive, inductive and informal help us to an extent in our day-to-day lives. Deductive reasoning helps us to think and figure out facts from general to particular. My neighbor insists that his cat Meg attacks only when she is scared because this is the general behavior of all cats. All kids of the block know that they needn't be scared of her, as long as they quietly pass by, without scaring her. Such deductive reasoning preserves truth but then it can gain strength only if the premises involved are true. Most cats behave in a certain manner but what if Meg is not like 'most cats'? Herein, lies the weakness. Then there is inductive reasoning which follows knowledge from particular to general. As I have tried and tested in the past that bananas are good for my health so I presume that bananas are good for all. This type of reasoning helps us to gain new knowledge in some other different ways. But inductive reasoning sometimes leads us to wrong generalizations as I realized after feeding my roommate with bananas regularly. ...read more.

So when the most prestigious debate contest was organized in the city it was the logical and universal decision to send him to participate. But quite inexplicably he panicked and bungled. The fact that so much faith was reposed in him should have given him confidence but it paradoxically caused a fall in confidence. One area of knowledge seems to be almost synonymous with reason and that is Mathematics which is often termed as "the science of rigorous proof". The terms like 'given', 'to prove' and 'hence proved'-all seem to indicate that logic and perception are the two indispensable ways of knowing in Math. According to G.K. Chesterton "Reason is itself a matter of faith. It is an act of faith to assert that our thoughts have any relation to reality at all." This indicates that intuitive feelings and reason cannot be segregated in our attempts to gain knowledge. In analyzing the strengths and weaknesses of reason as a way of knowing, we do not realize that its major strength is that even in this study we will present our views after we reason them out. So reason is after all very important. Due to emotions like ignorance or misguided pride, logic and reason sometimes may get clouded but reason ultimately prevails. ...read more.