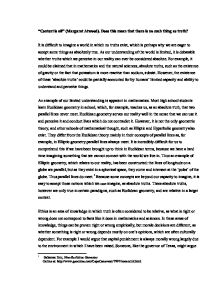 Context is all. Does this mean that there is no thing as the truth?

"Context is all" (Margaret Atwood). Does this mean that there is no such thing as truth? It is difficult to imagine a world in which no truths exist, which is perhaps why we are eager to accept some things as absolutely true. As our understanding of the world is limited, it is debatable whether truths which we perceive in our reality can ever be considered absolute. For example, it could be claimed that in mathematics and the natural sciences, absolute truths, such as the existence of gravity or the fact that potassium is more reactive than sodium, subsist. However, the existence of these 'absolute truths' could be partially accounted for by humans' limited capacity and ability to understand and perceive things. An example of our limited understanding is apparent in mathematics. Most high school students learn Euclidean geometry in school, which, for example, teaches us, as an absolute truth, that two parallel lines never meet. Euclidean geometry serves our reality well in the sense that we can use it and perceive it and conduct lives which do not contradict it. However, it is not the only geometric theory, and other schools of mathematical thought, such as Elliptic and Hyperbolic geometry also exist. They differ from the Euclidean theory mainly in their concepts of parallel lines as, for example, in Elliptic geometry parallel lines always meet. It is incredibly difficult for us to comprehend this if we have been brought up to think in Euclidean terms, because we have a hard time imagining something that we cannot connect with the world we live in. ...read more.

This is a limited, although pragmatic, truth, which enables us to function in our own reality. It exists even when context is all, as it is an individual truth; what is true in my perception of reality, is perhaps not true in yours. It is vital to establish that individual truth and belief are not synonyms and so even if I believe in unicorns, this does not mean that it is true that they exist in my reality. History is one area where individual truth becomes quite apparent as it is an area of knowledge where context is very significant. History can not be proven empirically and, though some facts such as 'Britain declared war on Germany on September the 3rd 1939' can be called true as there is considerable evidence to prove them, questions such as 'who started the Second World War' are extremely relative and are almost impossible to define absolutely true answers for. Individual truths ranging from polar opposites to small disagreements can exist in History almost directly as a consequence of context being so central. Therefore almost any viewpoint is liable to be justified, but only if it can be backed with enough facts. Facts are an aspect of truth which I would define as truths which humans have created or caused and to which context is irrelevant, such as the way we divide time into years and months and days. ...read more.

In both these areas of knowledge, individual truths do not exist in the same way as they do in for example history and ethics. However, as was already stated previously, they do not necessarily have absolute truths either as our capacity to understand and our capability to perceive is limited. Nevertheless, this does not mean that what we do perceive and understand is false and so, as humans and technology develop, who is to say that we could not eventually achieve a complete understanding of the mathematics and science of the universe; a universal mathematical and scientific Truth. If context is all, and everything is relative, then truth can exists in the form of pragmatic individual truths, or as a larger Truth to which we strive, but which we have failed to reach as of yet. However, when do we know that we've reached this state of Truth? There will always be the possibility that our senses have deceived us or our capacity to understand is too limited for us to realize that our perception is flawed. And is it really important to reach this state of Truth? Is it enough for us to have truths which serve our reality and to dismiss that which is perhaps irrelevant for our existence, such as Elliptic or Hyperbolic geometry? Perhaps we should appreciate the diversity and possibility that context dependency provides us with, as the idea of, for example, indisputable moral values seems daunting and even oppressive. Word Count: 1462 1 Saltsman Eric, Non-Euclidian Geometry Online at: http://www.geocities.com/CapeCanaveral/7997/noneuclid.html ?? ?? ?? ?? ...read more.