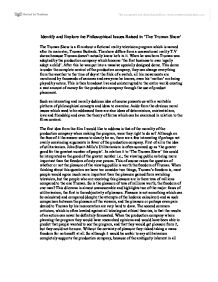 Identify and Explore the Philosophical Issues Raised in The Truman Show

Identify and Explore the Philosophical Issues Raised in 'The Truman Show' The Truman Show is a film about a fictional reality television program which is named after its main star, Truman Burbank. The show differs from a conventional reality T.V shows because Truman doesn't actually know he's in it. When he was born Truman was adopted by the production company which became 'the first business to ever legally adopt a child'. After this he was put into a massive specially designed dome. This dome is under the complete control of the production company, they can change everything from the weather to the time of day at the flick of a switch. all his movements are monitored by thousands of cameras and everyone he knows, even his 'mother' are being played by actors. This is then broadcast live and uninterrupted to the entire world creating a vast amount of money for the production company through the use of product placement. Such an interesting and morally dubious idea of course presents us with a veritable plethora of philosophical concepts and ideas to examine. Aside from the obvious moral issues which need to be addressed there are also ideas of determinism, existentialism, love and friendship and even the theory of forms which can be examined in relation to the films content. ...read more.

the subjectivity of pleasure, it is definitely fair to say that there is potential to build an argument for the production company based upon it. The next issue I want to address is that of how we perceive the world. In the film, for most of his life Truman has no idea that he is actually living inside a large dome and that his life is under the complete control of a television company. This may perhaps seem strange to us, surely someone's natural curiosity would lead them to leave the island and attempt to explore the world? However what we need to remember is that without anything to compare it too, and considering that all his life he has been taught that he doesn't need the outside world he wouldn't know any different. This film ties in very nicely to Plato's theory of forms, indeed it can almost be seen as a twentieth century version of the allegory of the cave. This allegory asks us to imagine some people chained so that they can only ever see a wall in front of them and cannot move, they cannot get up and have no other way of knowing anything other than by talking and looking at whatever shadows cross the wall in front of them. These shadows are produced by people carrying silhouettes of pots and horses etc. ...read more.

Their friendship was a reflection and an imitation of what we consider to be true friendship, it was only an imperfect copy of the real thing. In a manufactured world were friends for Truman are cast actors who are paid to get close to him he would, most people would agree only have an imitation of the idea of friendship, which exists independently and separately of the 'dome'. According to Plato this is like our lives and the ideas of beauty and justice etc. which exist completely prior of and removed from our lives as objective truths. However we never see through to the 'other side' because our perceptions are limited to this 'realm', in the words of Christof 'we accept the reality of the world with which we're presented'. In conclusion The Truman Show is a film which raises many interesting and contentious ethical issues, not least because they could be so easily applied to the many reality television shows which are present in our own culture at the moment. Admittedly the idea of Plato's Forms, even when given a bit more credence albeit circumstantial by the idea of latent learning is to say the least debatable. And to be perfectly honest wholly irrelevant to people's lives. However it is in the films ability to create a parallel with the television of our times and thus force us to look introspectively which gives it the force it has. Tom Gower 1418 ...read more.